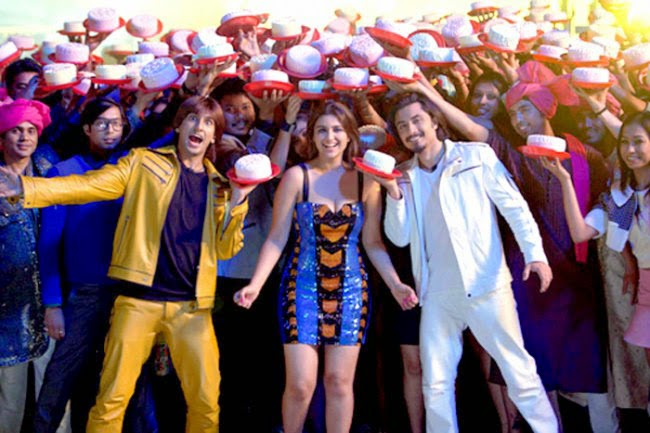 Happy Budday is the birthday song in Kill Dil in which Ranveer Singh sings at Parineeti Chopra's birthday party in the film.

The song was shot in Lavasa at night and it was very hot, around 40 degrees at that time. In this heat, Ranveer Singh was wearing leather pants for the song.

While shooting the song, the heat got to him and Ranveer became so uncomfortable in the leather pants that he took them off for air.

A pantless Ranveer was quite a sight for many present and created a huge commotion.

200 girls who were dancers in the song, started cat calling and whistling  at Ranveer.

Hearing the noise, people came to their windows to see what the commotion was about.  People even came out of their houses and down in their night suits to see Ranveer without pants.

People took pictures of Ranveer with his pants off and  this further complicated things. The unit had to run around taking everybody’s, including the dancers’ cell phones and deleting the pictures.

However Parineeti took a picture of Ranveer with his pants down and she has said she will keep it to blackmail him.
​Kill Dil also stars Govinda and Ali Zafar. Directed by Shaad Ali, it releases on 14th November.
Posted by http://www.starfriday2012.com/ at Wednesday, October 15, 2014