Night at the Museum: Secret of the Tomb review by ANIZ FILMVALA 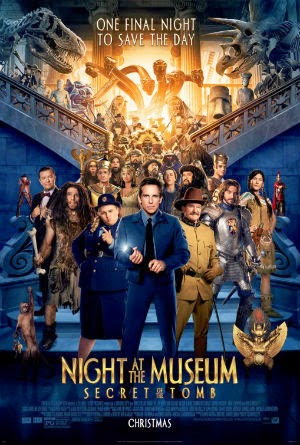 Night at the Museum: Secret of the Tomb
review by
ANIZ FILMVALA
*****
The third and final installment of the ‘Night at the Museum’ series is an ode of fantasy world, truly a Santa gift to kid’s world over. Enjoyable and a trip to utopia a run away to hassle free world.
Larry Daley [Ben Stiller] is back on a mission to save his favorite exhibits from the age old curse as to stop the tablet of Ahkmenrah from corroding. As the corrosion causes chaos during an opening event of a Museum of Natural History, the affected exhibits create mayhem and scare away the attendees.

Larry researches that the Ahkmenrah can be preserved back if he goes to the British Museum and confer with the parent Merenkahre [Ben Kingsley] of Ahkmenrah. By some means he convinces McPhee [Ricky Gervais] the curator of the Museum to get the permission of delivering some exhibits. As they reach British Museum host of new exhibits come to life and join them, eventually the adventure starts of restoring the Ahkmenrah as only the moonlight can stop the corrosion.

All the characters including late Robin Williams as Theodore Roosevelt, Attila the Hun, Sacagawea, Dexter the Capuchin Monkey, and Rexy the Tyrannosaurus skeleton and also Jedediah [Owen Wilson] and Octavius [Steve Coogan] from the earlier parts have been maintained a superb farewell bid to this unforgettable creatures given by Director Shawn Levy.