Konkana to go to London Indian Film festival with her film. 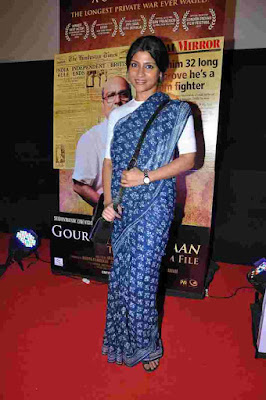 After pondering hearts at the New York Indian Film Festival Ananth Mahadevan's upcoming feature film Gour Hari Dastaan- The Freedom File is said to have a UK premiere before an India premier
Ananth received an overwhelming response at the New York Indian Film Festival where the movies was shown.
People marked the movie as a new generation awakening and he was requested for a UK premiere of the film by the director (CARY SAWHNEY ) of the festival himself
Konkana Sen Sharma , Ananth Mahadevan and Resull Potukutu will be attending this event from India.

Quote  From Konkana - I'm so excited about the international premiere of GHD in the UK !, I'm hoping to be there with the director myself to present the film at the London Indian Film Festival. I'll be watching the film for the first time with the audience there. The timing is great as we are releasing the film in August in India !
Posted by http://www.starfriday2012.com/ at Friday, June 26, 2015