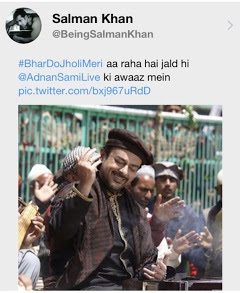 Salman Khan has announced collaboration with Adnan Sami for Bajrangi Bhaijaan.
The song in question is 'Bhar do jholi meri aaj'.
In the past Salman and Adnan have worked and created magic together in movies like Salaam-E-Ishq, Jaan-E-Mann, Lucky - No Time For Love.
Bollywood's Bhaijaan has also termed the song as one of his favourites in the film.
After creating curiosity amongst his fans with who the singer of his soon to be released track could be.
Salman has finally let it out in the Open by declaring Adnan Sami as the singer.
Adnan is not only lending his voice but will also feature in the song.
Salman also posted a picture of Adnan Sami's look in the song.
The song which is heard to be shot in a dargah sure does build intrigue when coupled with Adnan's soulful voice.
Here's something that Salman Khan and Adnan Sami's fans have to look forward to.
Posted by http://www.starfriday2012.com/ at Friday, June 26, 2015