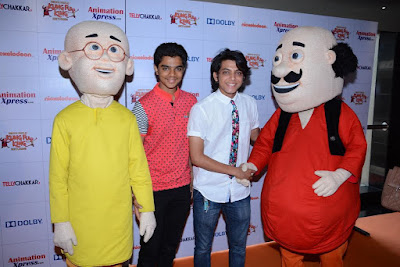 “Motu PatluKungfu King Returns” premieres on Sunday, 14thJune at 11.00 AM only on Nick
Mumbai, June 11, 2015: Nickelodeon’s awesome twosome Motu Patlu walked the orange carpet at their premiere screening of their sixth made-for-television movie with a host of celebrities at Fun Cinemas in Andheri, with celebrities like Sangram Singh, GiaaManek, Tasheen Shah, Rakesh Paul, Jaya Bhattacharya, Vishal Jethwa, Yash Mistry, Ruhana Khanna and many more. Also present at the event was Ketan Mehta, ace director and head of Maya Digital along with Nina Elavia Jaipur - EVP and Business Head, Kids Cluster Viacom18 and Anu Sikka, Programming Head, Kids Cluster at Viacom18.
After five back-to-back chartbusters, Nickelodeon, the most preferred entertainment destination for kids in India, is all set to launch the sixth made-for-television movie from the super-hit Motu Patlu franchise – “Motu Patlu Kung Fu King Returns”. The new rollicking adventure, “Motu PatluKungFu King Returns” with more action, double the adventure and super cool Kung Fu moves is all set to premiere on Sunday, June 14th at 11.30 am, only on Nickelodeon.
The adventure kick starts with the kidnapping Tim Tim, the grandson of Motu Patlu’s Kung Fu mentor – Himnaresh, by a mysterious creature with four hands. What happens next? Motu Patlu are assigned the task to rescue Tim Tim.  The journey of Motu Patlu high up in the spooky valleys of the mysterious Snake Mountain tofight an army raised by an evil scientist create edge of the seat adventure. Will Motu Patlu survive the angry army of Mutants?  Will they be able to save Tim Tim?  Motu Patlu’s new blockbuster in making is all set to take kids through a roller coaster ride of high octane fun and entertainment.
The remarkable Motu Patlu and their engagingcomedy of errors will once again entertain take children into Furfurinagar and beyond with outstanding action and swift kungfu moves. After their last outing with KhazaneKi Khojand to Kungfu Land, Wonderland, Mission Moon and the Deep Sea, this new adventure to Snake Mountain is sure to have you laughing all the way to Snake Mountain and back.
Catch Motu &Patlu fight the evil army of mutants and save Tim Tim in  ‘Motu PatluKungfu Returns’ this Sunday, June 14th at 11.30 am, only on Nick
-------------------------------------------------------------------------------------------------------------------------------
About Nickelodeon
Nickelodeon, one of India’s leading kids’ entertainment brand and part of the Viacom18 Media Pvt. Ltd, is available in over 100 million households in the country. The Nickelodeon cluster in India boasts of a bouquet of differentiated channels that cater to kids from tots to teens - Nick, Sonic and Nickelodeon (with 2 programming blocks i.e. Nick Jr./ Teen Nick). Nick Jr. (www.nickjrindia.com<http://www.nickjrindia.com>), which is ‘the smart place to play” believes that ‘education’ and ‘entertainment’ go hand-in-hand and is aimed at young parents and pre-schoolers. Internationally acclaimed shows like Dora the Explorer, Bubble Guppies, Wonder Pets, Team Umizoomi and Go Diego Go foster motor, memory, maths and language development in a child. The Nickelodeon channel also caters to teenagers in the latter half of the day with the Teen Nick block which showcases international sitcoms such as ICarly, Victorious and Drake and Josh. The Nickelodeon cluster has an ecosystem that extends beyond television into Consumer Products, on-ground and digital platforms.