MIKA SINGH: A MAN OF HIS WORDS 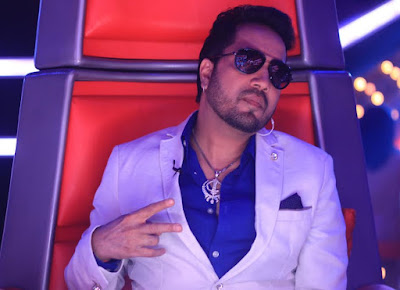 Mumbai, July 2015: During the Blind Audition rounds of Endemol Shine India’s ultimate singing talent hunt ‘The Voice: India’, the coaches had wooed and bribed the contestants in various ways to persuade them to join their team. Sanjana Bhola, a 16 year old popular jagrata singer who performed "Chhap Tilak" was one such contestant that coaches Mika Singh, Sunidhi & Himesh wanted on their team.

All the coaches as is norm tried persuading her in many ways to get her to join their team, but Mika Singh was so impressed with Sanjana’s singing talent and voice quality that he announced then and there that his foundation Divine Touch would sponsor her education irrespective of which coach she selects or how far she goes in the competition. Though the young talent ultimately chose Himesh Reshammiya as her coach, the magnanimous Mika Singh kept his promise and his foundation handed over the letter of sponsorship to Sanjana. The young talented singer was pleasantly surprised and very touched by this kind gesture and sincerely thanked Mika Singh & his foundation.

Mika however is not the only coach that has kept a promise made during the blinds, Himesh Reshammiya too had promised a contestant Sachet Tandon that he would gift his golden shoes to him if he would join his team. Himesh later gifted his golden shoes to Sachet during the coaching session which he wore during the battle round. Sachet considers those shoes as his lucky charm as he won the battle round against fellow contestant Sayan.

To catch such more interesting moments tune-in into The Voice: India on &TV everySaturday & Sunday at 9 pm.
Posted by http://www.starfriday2012.com/ at Monday, July 20, 2015