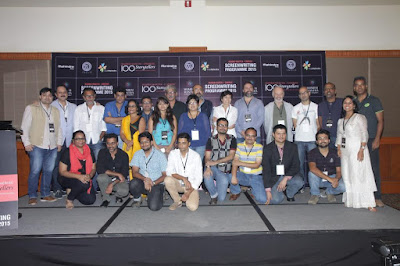 Mumbai, India: Mumbai Mantra Media Ltd., the media and entertainment vertical of the Mahindra Group, has selected 10 Indian feature film projects for the first edition of their Mumbai Mantra – CineRise Screenwriting Programme 2015, to be held from  August 9 -14 at a Club Mahindra Resort.


LOGLINE: In a lawless suburb in Kanpur, tough, conservative cop, Jatil Yadav, attempts to solve the murder of the head of an old feudal family, Raghubeer Singh, who is found lying in a pool of blood on the night of his wedding to the young, alluring bride, Radha.
Writer/Director: Smita Singh
Having completed her Screenplay Writing course from FTII, Pune, in 2013, Smita Singh is currently writing for Abhishek Kapoor’s Guy in the Sky Productions. She has worked for 14 years in Television, mostly documentaries and non-fiction, making shows for National Geographic Channel and BBC World, amongst various other channels.
LOGLINE: Thakurmar Jhuli is a collection of old Bengali folktales that have travelled down the paths of time as bedtime stories to children, one generation after another. One of the most iconic stories in the mix is the story of two princes, reincarnated to fight the blight of demonic predators that prey on humans in a world full of magic, awe and mystery. As the young Lalkamal and Neelkamal grow up ensorcelled in the tales of princes, kingdoms and demons, they find themselves hurled headfirst into an adventure that settles the truths behind the fairy tales.
Writers/Directors: Mahee Pal & Mon Pal
The duo of brothers who play to each other’s strengths, Mahee and Mon are separated by a decade of differences. And they hope to bring the best of both worlds to the stories they grew up listening to, especially the story of Lalkamal and Neelkamal, the two brothers who brought down the mythical demon queen.
Mahee and Mon, two brothers on a quest to bring the bed-time story to life on the big screen.
LOGLINE:  An extraordinary tale of an ordinary roadside Biryani seller from the streets of Kolkata, who embarks on a journey to realise his unfulfilled dream of becoming an artist, set in the backdrop of globalisation and the rapidly-changing socio-political demography of urban India.
Writers/Directors: Rajdeep Paul & Sarmistha Maiti


Rajdeep Paul and Sarmistha Maiti are National Award winning filmmakers and writers, who are alumni of SRFTI and have produced, written and directed shorts and documentaries. Their important films include the critically acclaimed short fiction 3 on a Bed – India’s First Polyamoric Film, and documentaries: At the Crossroads: Nondon Bagchi Life andLiving (Special Mention to Directors’ Award – 61st National Film Awards 2013, Mumbai Film Festival 2013, IDSFFK 2014), She Creates to Conquer (IDSFFK 2015), Mrinal Sen – An Era in Cinema and Denizens of the Divine Market (IDPA Award 2009). They have worked in international documentaries,Half the Sky, a PBS, USA production and Bengali Detectives, a Native Voices, London production. They have also co-written the book 3 on a Bed: Contemporary Indian Novellas. Sarmistha has worked as a journalist and art-critic with leading publications while Rajdeep has a published novel, Davyaprithvi – Heaven on Earth, to his credit.