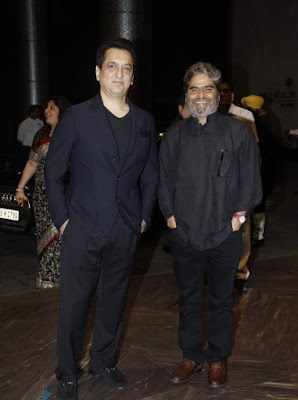 Both th ace film makers have collaborated their creative forces for Rangoon which is a Saif-Shahid-Kangana musical film, set against the backdrop of World War II
Vishal Bhardwaj is a master storyteller. A major point to note with his epic Rangoon, though, is the scale on which it is mounted. Calling the Saif Ali Khan, Shahid Kapoor and Kangana Ranaut starrer, which goes on floors on November 15, his most ambitious venture, the National Award-winning filmmaker says, “Rangoon is a classic tale that will have the musical charm of Moulin Rouge, the romance of Casablanca and the intensity and drama of Saving Private Ryan. Like Saving Private Ryan, Rangoon too is set against the backdrop of World War II.“

Talking of his decision to join hands with Sajid Nadiadwala's banner Nadiadwala Grandson Entertainment Pvt. Ltd (NG) for this magnum opus, Vishal says, “I wanted to make this subject for eight years now. However, I knew from the start that this is a film that would take the vision of a producer like Sajid. It needs to be mounted on a lavish scale and after meeting Sajid, I felt he was the right man to take this project forward. The film not only needs a huge budget,but also requires someone who believes in it and allows me to make it the way I have envisioned it. I have made eight movies until now. However, I must add here that the scale of all those films put together is on one aside and that of Rangoon, alone, is on the other. That's how ambitious Rangoon is.“
Commenting on the collaboration, Sajid says, “The NG team and I are very excited to work with Vishal Bhardwaj.“


Sajid and Vishal are sure to leave no stone unturned to ensure that this is one of the most ambitious Indian movies that the world has ever seen.

Rangoon is written by world-renowned writers Matthew Robbins, who collaborated with Steven Spielberg on The Sugarland Express (1974) and more recently with Guillermo del Toro for Crimson Peak (2015) and Sabrina Dhawan, who worked with Mira Nair on Monsoon Wedding (2001). It will be shot in Mumbai, Arunachal Pradesh and in the US.
Posted by http://www.starfriday2012.com/ at Thursday, October 29, 2015