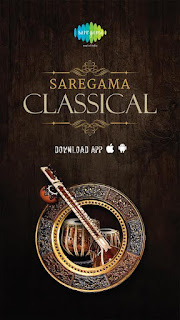 Saregama Classical App  launched by RP-Sanjiv Goenka Group owned music label Saregama India Ltd., has in the first 2 weeks of its launch seen 50,000+ downloads from listeners.  To mark this milestone, Saregama has added a rare collection of Gauhar Jaan’s musical works to the application. Gauhar Jaan is India’s first recorded artist. Her first performance was recorded on 78 rpm records on 2nd Nov’1902 and released by The Gramophone Company of India (former name of Saregama). India's first-ever record had Gauhar Jaan singing a composition in Raag Jogiya in Dadra Taal. This rare piece is a treat to the connoisseurs of classical music lovers and Saregama has endeavoured to bring this music to the digital consumers of this application.

According to Mr. Vikram Mehra, Managing Director Saregama India Ltd., “Being the custodian of the rare recordings of the doyens of the classical music fraternity we believe that the classical music lovers have found the answer to their yearnings in Saregama Classical App. The initial response has been phenomenal and we are adding hundreds of new works today taking the total count of songs to 10000+”

About Saregama India Ltd:
Listed on the NSE and BSE, Saregama India Limited, is India’s largest and best-known music recording company.
Formerly known as The Gramophone Company of India Ltd, Saregama owns the largest music archives in India, one of the biggest in the world.  The ownership of nearly 50 per cent of all the music ever recorded in India also makes Saregama the most authoritative repository of the country’s musical heritage. Saregama has now expanded into other branches of entertainment – it is involved in publishing, television software and digital content. It also runs studio facilities in Dum Dum, Kolkata making it one of the best end-to-end entertainment houses in the country.