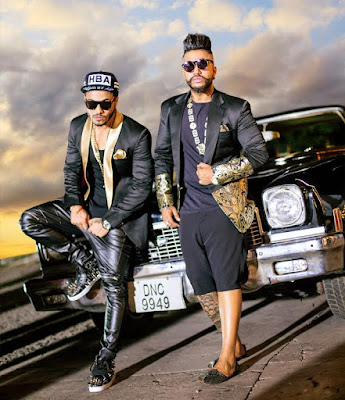 After stupendous success of his single “Jaguar” famed Punjabi singer Sukhe is now ready to enthrall the audience with another chartbuster single ‘All Black’ featuring renowned rapper Raftaar. ALL BLACK is being released by India’s biggest music label T-Series. The label has produced a very stylish video which shall be seen on mainstream Hindi satellite music channels in addition to Punjabi TV channels.

Talking to the media, Sukhe said, Jaani (Lyricist) has put in lot of attitude in the lyrics and the music is real hip hop style which will resonate with the youth. After Jaguar, the expectations from me are really high and I hope “All Black” will meet those expectations. Raftaar has added a real punch to the track”

Neeraj Kalyan, President of T-Series said, “the team of Sukhe, Raftaar & Jaani have come out with a really gem of a groovy track. T-Series is making a big departure from the norm by releasing this Punjabi video on T-Series mainstream channel on YouTube. The song shall be promoted heavily across all national satellite channels. Raftaar’s rap is the song highlight”

Raftaar’s rapping has bought the singer quite some accolades under his name. The rapper has been a popular for his spunky rap numbers in Bollywood and smashing singles in Punjabi. ‘All Black’ is groovy number where the two stars will be seen trying to woo their girls in their own style. While the song is a Punjabi number, Raftaar will be seen rapping in all Hindi. The quirky but meaningful lyrics is what makes the song different and the reason why T-Series decided on backing the project.