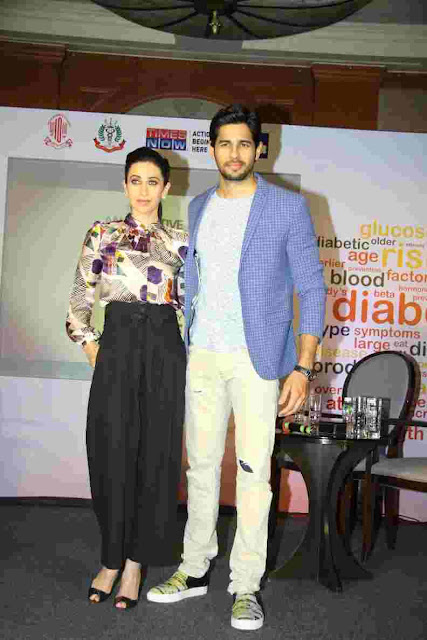 Mumbai, November 16, 2015: Bollywood star, Karisma Kapoor teamed up with heartthrob and Student of the Year,Sidharth Malhotra for a truly noble cause. The duo joined hands with the All India Ophthalmological Society (AIOS) and the Indian Medical Association (IMA) to spread awareness on Diabetic Retinopathy which is a condition arising due to diabetes and can cause permanent blindness to an individual if left untreated.

Keeping the high risk of the disease in mind, the AIOS has organized 200 Diabetic Eye Screening Clinics (DESC) across India to screen the diabetics and empower them to take timely measures. The camps will be held across all cities in India from November 14 to November 21 in order to mark ‘World Diabetes Week’. In Mumbai there will be close to 15 clinics examining and explaining to the patients about the perils of Diabetes. Saifee Hospital, Mumbai Retina Centre, P.D. Hinduja Hospital and K.J Somaiya Medical College are amongst the few places where Mumbaikars can visit and get themselves checked.

Commenting on the initiative, Dr. Quresh B. Maskati, Immediate Past President - AIOS and National Convenor DESC, AIOS said, "The AIOS is the world's largest national body of eye surgeon's with almost 20,000 members. We are conducting these camps simultaneously across 200 diabetic eye screening clinics with each running from 1-7 days during the World Diabetes Week and we aim to screen 20,000-25,000 diabetics in a week. The data from each patient is being preserved and will be later analysed and presented to the Department of Non-communicable Diseases, Ministry Of Health, Govt. of India within a month so that policy decisions can be made based on our recommendations. We would also like to thank Times Now for their immense support in helping AIOS reach out to the diabetics across the country and build awareness for this cause."

Speaking on the association, Bollywood beauty Karisma Kapoor said, “I am pleased to associate with All India Ophthalmological Society and the Indian Medical Association and would like to thank them for taking up the noble initiative that is being supported by Times Now to raise awareness on diabetic retinopathy. I personally know people who suffer from diabetes and it is increasingly becoming a cause for concern since diabetes can affect anyone irrespective of their age. I am grateful for the opportunity to help raise awareness on this common yet too often neglected and preventable issue. I would urge people who suffer from diabetes to visit these clinics for free testing and continue to do so year-on-year.”

Former model and current Bollywood heartthrob, Sidharth Malhotra said, “In our industry and with a lot of professionals, it is quite common to develop unhealthy eating habits, suffer stress and lead a sedentary lifestyle due to the hectic pace of life. All of these compound to causing diabetes and it can affect someone as young as a 20-year old. I am happy to be part of All India Ophthalmological Society and the Indian Medical Associations’ initiative to raise awareness on diabetes and diabetic retinopathy which is being supported by Times Now. I hope people from across the country will take advantage of the free eye testing clinics being organized by these medical bodies and take care of their vision.”
With an initiative of such a large magnitude being undertaken, it is imperative that eminent personalities come forth and share their views on the topic. A panel discussion was organized by AIOS on November 16, 2015 at J.W Marriott, Juhu to discuss and dissect the hazards caused by one of the deadliest disease affecting millions across the globe.  B-town A-listers Karisma Kapoor & Sidharth Malhotra formed an elite panel alongside highly qualified doctors from the Indian Medical Association, J.J Hospital and All India Ophthalmological Society and raised concerns with respect to Diabetic Retinopathy. They spoke at length about the dangers of the disease and stressed on the importance of visiting a diabetes specialist and an eye surgeon at regular intervals. To make things easier for everyone, the panelists urged everyone to visit the numerous clinics set up by AIOS in order to prevent permanent loss of eyesight.

The All India Ophthalmological Society aims to examine more than 20,000 diabetic’s right from Kashmir to Andaman and Nicobar Islands in a bid to safeguard the vision of the masses free of cost! Doctors stationed at these camps will screen patients for changes in the retina due to diabetes referred to as Diabetic Retinopathy in medical terminology. The ones who get detected with the ailment are referred to charitable and government centre’s for further evaluation and treatment.

With the AIOS, the largest body of Life member eye surgeons in the world and the Indian Medical Association coming together and organizing diabetes screening camps on such a large scale, India is on its way to preventing blindness stemming from Diabetes. TIMES NOW, India’s No. 1 English News Channel is doing its bit in promoting the clinics by running videos about the same on their Facebook and Twitter handle. Click on the following link and spread the awareness:  https://twitter.com/TimesNow/status/663047663479230464 ;
https://www.facebook.com/Timesnow/videos/vb.218735715310/10156282536655311/?type=2&theater

Join the AIOS in spreading the word in helping people to get examined.
Posted by http://www.starfriday2012.com/ at Tuesday, November 17, 2015