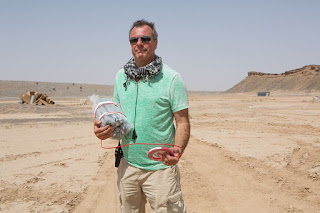 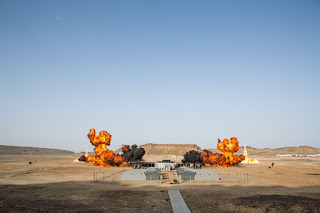 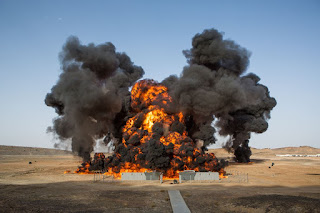 Tuesday, November 10 / Beijing, China –  In addition to breaking box office records across the globe, SPECTRE, the 24th James Bond adventure, has been awarded a Guinness World Records™ title for the Largest Film Stunt Explosion, it was announced today at a press conference in Beijing, China.  SPECTRE, from Albert R. Broccoli’s EON Productions, Metro-Goldwyn-Mayer Studios, and Sony Pictures Entertainment, opens in China this week.

Producer Barbara Broccoli and stars Daniel Craig and Léa Seydoux – who appear in the scene – accepted the record certificate on behalf of the official title holder, Academy Award® winner Chris Corbould, who served as Special Effects and Miniature Effects Supervisor on SPECTRE.

The incredible explosion was filmed for a pivotal scene in the film and took place on June 29, 2015 in Erfoud, Morocco and used 8418 litres of fuel and 33kg of explosives.

Commenting on the announcement, Michael G. Wilson and Barbara Broccoli, the producers of SPECTRE, said, “It is absolutely tremendous that the Guinness World Records have recognized Chris Corbould’s incredible work in Spectre in which he created the largest explosion ever in film history.”

Guinness World Records Editor-in-Chief Craig Glenday added: “The James Bond movies are synonymous with pushing cinematic boundaries. The latest film, Spectre, has again captured the imagination of global cinemagoers, and this will certainly be due in part to the phenomenal stunts. The scene featuring the world’s largest film stunt explosion is spectacular and will live long in the memory as one of the outstanding moments in the Bond franchise.”  The Largest Film Stunt Explosion is an early front runner for inclusion in Guinness World Records 2017, out next year. The 2016 edition is currently on sale.

Footage from the film is available athttp://sonyintl.epk.tv/.

About Albert R. Broccoli’s EON Productions
EON Productions Limited and Danjaq LLC are wholly owned and controlled by the Broccoli/Wilson family. Danjaq is the US based company that co-owns, with Metro-Goldwyn-Mayer Studios, the copyright in the existing James Bond films and controls the right to produce future James Bond films as well as all worldwide merchandising. EON Productions, an affiliate of Danjaq, is the UK based production company which makes the James Bond films. The 007 franchise is the longest running in film history with twenty-four films produced since 1962.  Michael G Wilson and Barbara Broccoli succeeded Albert R ‘Cubby’ Broccoli and have produced some of the most successful Bond films ever including CASINO ROYALE, QUANTUM OF SOLACE, SKYFALL and SPECTRE.

About Guinness World Records
GUINNESS WORLD RECORDS (GWR) is the universally recognized global authority on record-breaking achievement. First published in 1955, over 134 million copies – and 3 million e-books - have been sold in 21 languages, in more than 100 countries. Since then, the internationally renowned brand is also available across a number of platforms; Guinness World Records global television shows are watched by over 750 million viewers annually, 800,000 subscribe to the Guinness World Records YouTube channel which received 300 million + views annually, the global website receives 14 million viewers annually and over 9 million fans on Facebook.