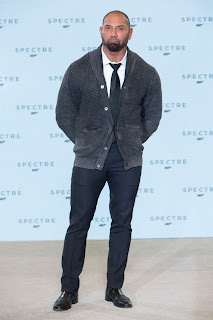 Globally renowned SPECTRE actor Dave Bautista who will be seen as formidable villain and nemesis to Daniel Craig aka James Bond in Spectre releasing on 20th November in India, has sent a special video message to Varun Dhawan challenging him to a fitness match!!
A special video message personally recorded by the Spectre villain in which he reaches out and specially asks none other than our own youth icon Varun if he is up for a fitness pull up challenge.
Tweet to Varun Dhawan
#SPECTRE's @DaveBautista challenges @Varun_dvn to a pull up challenge ahead of the film release this Friday. http://bit.ly/1SSVPQN
https://twitter.com/SonyPicsIndia/status/666129743855513600
Dave Bautista's challenge link : https://www.youtube.com/watch?v=KdErYkvT6rE
When he heard about this, Varun Dhawan said he will gladly accept Dave's challenge!! "Dave Bautista has called me out and while he's faced some of the strongest and baddest men on the planet he's never faced me one on one i have accepted his challenge and will respond!! I have always admired Bautista and how he's transitioned from wrestling to acting ...I'm definitely looking forward to Spectre." said Varun Dhawan
SPECTRE, the 24th James Bond adventure, from Albert R. Broccoli’s EON Productions, Metro-Goldwyn-Mayer Studios, and Sony Pictures Entertainment, is set for release in India on November 20, 2015 in English, Hindi, Tamil, Telugu.
Posted by http://www.starfriday2012.com/ at Monday, November 16, 2015