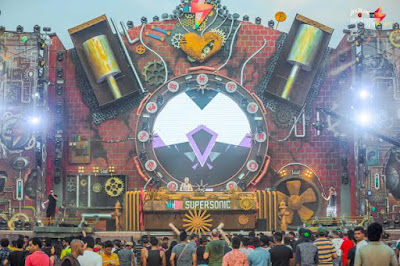 ~On Day 2 - Fans #GoSupersonic on the sands of Candolim!


If you thought a dance music festival was all about a bunch of dudes with earphones tinkering around with some heavy duty sound gear, it’s time you make your way to Vh1 Supersonic 2015 to experience what a dance music experience is all about. While the music magicians cast their spells on the crowd with their unmatched genius, there’s also a whole host of performance artists who’re bringing the music alive in their own style.


As thousands of fans thronged the sands of Candolim, artists such as Vachan Chinapa, Sultan and Ned Shepard, Mossilator and BLOT! took to the three iconic stages, Laboratoire Supersonique, Spectrum and the steampunk phenomenon Iron Heart. With the sun just about setting, fans were already queuing up for headliners such as Zedd, Don Diablo, Teddy Killers and Dirtyphonics who were going to light up their nights with spectacular performances.


Seen enthralling the audiences with a pharaonic odyssey on the Iron Heart stage with their mesmerizingly graceful display were wing dancers who took dance music to newer heights. Glittering fabric that made the dancers look like divine birds descended upon the stage to twirl to the music earning a massive cheer from the party goers. Many even expressed their desire to get up on the stage and dance alongside these performers!


Also seen were performers manipulating fire to wow the music fans with their precession and flair. Fans were thrilled to see fire artists moving to the beats of their favourite tunes and cheered them on with crazy enthusiasm.


The artists themselves joined in the fun as the music clearly moved everyone from those who perform to those who listen to it. The energy both on and off the stage was clearly at par with artists fist bumping, jumping in the air egged on by the fans on the sands who just couldn’t get enough of all the excitement surrounding them!


Shout out to all the party mongers! If you’re not already here…make sure you get here…ASAP!
Buy your tickets at: www.gosupersonic.com  and www.meraevents.com/vh1supersonic2015/


Live Viacom18 is a is a wholly owned subsidiary of Viacom18 Media Pvt. Ltd. Live Viacom18  was  set  up  with  a  strategic  objective  of  growing  International  entertainment  and  its  consumption on all platforms : Live, Television, Mobile and Online. Live Viacom18 focuses on building IP’s in all genres of Music (EDM, Rock, Pop and Jazz) and Entertainment (Comedy and theatre shows). LIVE Viacom18 has built more than 12 large format IPs across categories over the last few years and is uniquely positioned to build a 360 degree promotional and fan base built   up ecosystem.  Live  Viacom18  has  a  strong  technology business called Spotlight which has  direct  partnerships  with  all  leading  telecom  and handset operators in India which give its  access to 900 million touch points for pushing  consumption of music, varied form of content  and  music  from  the  live  events  and  Artists  bytes and trivia. LIVE Viacom18 engages with millions of consumers through impactful large format live properties such as Vh1 SUPERSONIC, MTV VMAI, Nickelodeon KCA, Emerge, MTV Xtreme, and Comedy Central Chuckle Festival amongst others.