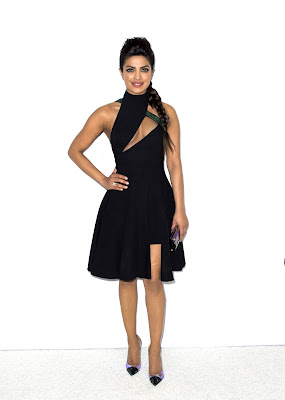 ~ The story of four girls on a journey of life, love and lunacy in Mumbai City ~
~ Co-produced by Purple Pebble Pictures & Endemol-Shine India ~
~ Premiers, Friday 22nd January 2016 with new mobisodes every Tuesday and Friday~

India, January 21, 2016: nexGTv - India's biggest subscription-driven video entertainment mobile App, and Fluence – India’s largest celebrity digital network, unveiled their unique association with renowned international celebrity and Bollywood superstar Priyanka Chopra. nexGTv, Fluence and Priyanka Chopra have come together to create ‘It’s My City’- an original 14-part mobi-series about four girls on a journey of life, love and lunacy in the big city of Mumbai! The mobi-series premiers on nexGTv on Friday 22nd January 2016, with new mobisodes every Tuesday and Friday.

A singer, producer and superstar par excellence, Priyanka’s runaway success with Quantico and recent powerful performances in Bajirao Mastaani and Mary Kom have endeared her to people, making her a household name worldwide.

With India’s first celebrity led mobi-series, nexGTV takes the big leap in digital entertainment with original content. Created by Fluence and produced in association with Priyanka’s production company, Purple Pebble Pictures and Endemol-Shine India, this bi-weekly series will be available exclusively on nexGTV - India’s biggest Live TV platform with 150+ channels, 1000+ movies, as well as hundreds of TV shows and video-on-demand.

Speaking in her capacity as Mentor and co-producer of the show, Priyanka Chopra said, “Digital is the new frontier of content and I’m diving right in!  It’s a super exciting world in which I find myself equally fascinated with and immersed in completely. The thought behind ‘It’s My City’ is progressive… to go where the young audience has moved towards… to connect with them in a style that they can identify with and for me personally, to engage with them in a whole new way.  I’m excited to be embarking on this journey with such amazing partners… nexGTV who not only have created a robust platform for mobile entertainment but have also made a firm commitment to creating and delivering quality, original content. I’m thankful to Fluence and Endemol-Shine India for being such a formidable force and co-producers in our maiden digital venture.  It’s time to just press ‘PLAY’!!!

Speaking on the association, Mr. Abhesh Verma, Chief Operating Officer, nexGTV, said, “As the first South Asian woman to win the hugely popular People’s Choice Award, Priyanka Chopra is today an undisputed beacon of strength and a role model for countless young women worldwide. As someone who has challenged and redefined the status quo numerous times over the years, she epitomizes the young, Indian woman of today and is therefore the perfect match! In associating with Priyanka for ‘It’s My City’ mobi-series, we have attempted to channel her own experiences as a young woman wanting to create her own special identity in a city far from home”.

Mr. Abhesh Verma further mentioned, “We are confident that our audience will find our first Original series a must-watch, inspiring young women everywhere to face the world confidently and on their own terms”.

Speaking on the behalf of Fluence, said Rishi Negi “Fluence is in the business of creating unique and differentiated digital experiences with India’s top talents.Priyanka Chopra is one such amazing and versatile actor who has mesmerized fans across the globe, she is also one of the most influential social media celebrities in India. Creating this series with Priyanka for nexGTv is another step towards our growing focus on digital content development. This collaboration will draw audience subscriptions and views for the show and the platform via social media by engaging Priyanka’s close to35 million fans and followers in a new and highly compelling way”.

‘It’s My City’ will premiere as a 14-episode premium, original series that revolves around the everyday lives and struggles of four young girls –Manika, Sonali, Tina and Nikki – living together in the same flat in Mumbai.  Mirroring the reality of our everyday lives, the series captures the highs and lows, trials and tribulations, ups and downs of these girls as they set out to achieve their dreams and conquer the world.  Captured in a light hearted fashion, this sit-com, also offers a unique and realinsight into the lives of Indian girls staying away from their families in pursuit of their dreams…in the city of dreams…Mumbai! It captures their struggles and successes with ambition, careers, faith, friendship and romance. In her inimitable style, Priyanka Chopra appears in and as herself assuming the mantle of an official landlady, unofficial guardian and protective friend.

Adds Priyanka, “This is a contemporary story featuring real stories and real conversations and situations.  There is a huge parallel that can be drawn to my own reality…of a young girl coming to Mumbai to literally make my dreams come true.  I hope the stories are something the audience will identify with”.

‘It’s My City’ Premiers on nexGTv Friday, 22nd January 2016 with new mobisodes every Tuesday and Friday

With over 25 million downloads, nexGTV mobile App is the unmistakable TV button on your mobile. It is Digivive's flagship, multi award-winning application offering consumers unlimited and compelling entertainment across multiple devices (mobile, tablets or laptop/PCs). Choice includes an unrivalled suite of 150+ Live TV channels aside from a huge content library comprising of movies, TV shows and videos for every mood.

Besides ranking amongst the Top Entertainment applications in App stores, nexGTV has also won numerous awards including 'The Best Digital Experience' at the prestigious World Communication Awards 2014, in London. It runs seamlessly across 2G/EDGE/3G/4G and Wi-Fi networks across platforms such as Android, iOS, BlackBerry and Tizen, enabling consumers to stay entertained irrespective of bandwidth limitations and the operating platform.

The company recently launched SPOTLight – India’s first mobile talent discovery platform, together with ace director and master storyteller Imtiaz Ali as the creative judge, enabling both amateurs and professional video enthusiasts to not only showcase their talent pan-India on nexGTv, but also earn off it, aside from Rs.100,000 cash award to one lucky winner who figures amongst the Top 5 most-viewed videos every month on the platform.

Conceived by technology professionals together with deep consumer insights, Digivive focuses on creating offerings in line with trends, with best-in-class content, ease-of-use, availability and affordability, giving consumers an unparalleled and immersive viewing experience. Our partners include leading telecom operators and OEMs. Established in 2010, Digivive is a group company of Media Matrix Worldwide Limited which is listed on the BSE. It provides expertise across Direct to Consumer and Managed Value-Added Services.

About Fluence
CA Media Digital’s first venture, Fluence is India’s leading Celebrity digital network connects celebrities with their fans and brands through their online presence. Fluence works closely with celebrities to build and grow their online presence across the digital landscape in an engaging and entertaining manner. Fluence also works with the artists to create interesting properties that can be monetized across various consumer facing Digital platforms.
Fluence currently manages the digital life of over 30 celebrities such as Amitabh Bachchan, Sachin Tendulkar, Salman Khan, Ranveer Singh and Arjun Kapoor etc. which include their social media presence, their digital endorsements, online/mobile monetization and equity-linked investments in the digital space