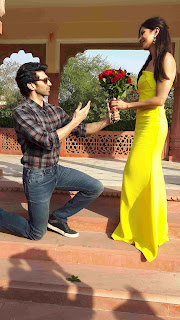 On the occasion of International Rose day, Katrina Kaif received a record number of roses from her dear co-star Aditya Roy Kapur.
As Rose day is celebrated across the country on the 7th February each year i.e. exactly one week prior to Valentine’s Day (14th Feb), Aditya thought that this would be a perfect gesture to make his co- star feel special.

Aditya-Katrina who were in the pink city of love, Jaipur to promote their upcoming film Fitoor, celebrated the occasion at Jai Mahal.

The actor who will be seen romancing Katrina Kaif on screen in their upcoming love story planned this really romantic gesture to surprise Katrina on 7th February 2016.
The idea came to Aditya a couple of days back when he immediately got on to make arrangements for it to be ready in Jaipur where they are promoting Fitoor.

He definitely wooed Katrina by gifting her a truck filled with about 1 lac roses. No girl must have received so many roses in one day alone!

Katrina was absolutely surprised and deeply touched with this gesture and gave a big hug to Aditya while thanking him for his unique gesture.

Fitoor is a love story of a poor boy and rich girl which will feature Aditya-Katrina opposite eachother on celluloid for the very first time.