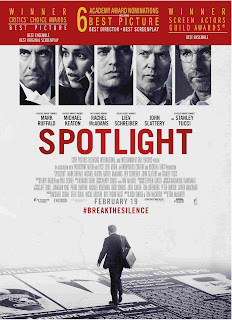 Critics’ Choice Awards “Best Picture” awardee Spotlight which is also  the leading  contender for “Best Picture” at the upcoming Academy Awards has garnered rave reviews around the globe and has now been cleared to release in India on February 19. The hard-hitting film based on the relevant and controversial issue of child abuse by clergy will release in its original version without any cuts.
Spotlight is a tense investigative thriller, tracing the steps to one of the biggest crime stories in modern times. The film has garnered a total of six Academy Award nominations in the categories of Best Picture, Best Original Screenplay, Best Director, Best Supporting Actor (Mark Ruffalo), Best Supporting Actress (Rachel McAdams) and Best Editing. It most recently won a Screen Actors Guild Award for Best Ensemble Cast.


It currently rates at 96% on Rotten Tomatoes. Time* and Rolling Stone** both declared it the top movie of 2015.
The film boasts of stellar performances from a topline ensemble cast of critically acclaimed actors like Michael Keaton, Mark Ruffalo, Rachel McAdams, Liev Schrieber, Brian D’Arcy James and Stanley Tucci.
Spotlight tells the riveting true story of the Pulitzer Prize-winning Boston Globe investigation that rocks the city and causes a crisis in one of the world’s oldest and most trusted institutions - the Catholic Church. When the newspaper’s tenacious “Spotlight” team of reporters, delve into allegations of abuse in the Catholic Church, their year-long investigation uncovers a decades-long cover-up at the highest levels of Boston's religious, legal, and government establishment, touching off a wave of revelations around the world. Directed by Academy Award-nominee Tom McCarthy,Spotlight is a tense investigative thriller, tracing the steps to one of the biggest crime stories in modern times.
Spotlight is being praised for its sensitive non-voyeuristic handling of a delicate subject with respect to survivors.