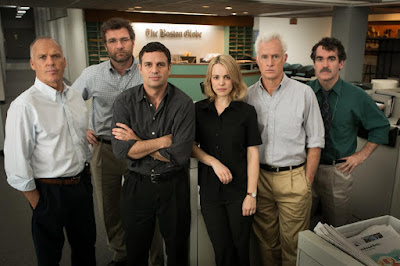 Liev Schreiber invests his portrayal of Boston Globe executive editor Marty Baron with a quiet resoluteness that writer Josh Singer observed while researching the film. The role landed Schreiber a Screen Actors Guild award along with his co-stars. He stated on social media “Thanks Marty this one's for you.”, “So proud to share a screen with this incredibly generous and talented group of actors. There is no greater reward.”
Talking about meeting the real Marty, screen writer, Singer added, “When I interviewed Marty in Washington, D.C., he had a Post-It note in his office that read ‘I am not warm and fuzzy.’ Marty doesn’t care at all about who he’s going to piss off. His job is to get the story.”
Schreiber, who was recently nominated for an Emmy® for his performance in the title role of Showtime’s crime drama “Ray Donovan,” instantly gravitated to the uncompromising character of Baron. “One of the film’s most exciting aspects for me came about when I got the opportunity to take the train down to Washington and meet Marty Baron,” says Schreiber. “It was a treat to spend time with him and really understand the dire straits a lot of newspapers in this country find themselves in. In fact, that’s one reason I love this script so much—it really champions newspapers and journalists.
“Marty and the other journalists in this story are heroes to me,” the actor continues. “Having spoken to Marty, one thing I realized is that his job was all-consuming. He didn’t care where the story took him. Marty likes a fight and he doesn’t back down and he was willing to take on very intimidating people and organizations to get at the truth.”
Liev Schreiber is noted for his films like X-Men Origins: Wolverine, Taking Woodstock, Salt and more recently Pawn Sacrifice.
Posted by http://www.starfriday2012.com/ at Friday, February 12, 2016