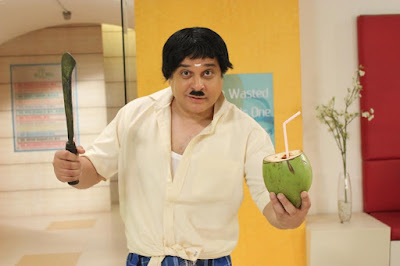 SAB TV’s new show Woh Teri Bhabhi Hai Pagle has been garnering a lot of attention and the viewers are enjoying the current track on the show. The latest track will see an amazing twist with the very talented Mahesh Thakur donning a new avatar for the upcoming storyline.


Mahesh Thakur who is seen as the millionaire father of Ranbeer on the show will be seen in a completely different avatar in upcoming track. Being a rich single father and not being able to spend time with his only son he figures out a way to go meet him at his workplace. Being very jovial by nature, he is ready to do anything for his son and so he decides to disguise himself as a naariyal paani vaala. But this creates chaos and a mess in the hospital.

When spoken to Mahesh Thakur he mentioned, “Well when I got to know I was to dress like a naariyal paani vaala the first thing that came to my mind was Mithun Ji from Agneepath where he played the character of Krishnan Iyer M.A the naariyal paani vaala. It’s a fun add on to my character where I disguise myself to this funny character where I to go meet my son Ranbeer(Ather Habib) at his workplace so that his secret of not being a spoilt son of a rich father remains untold. I hope the viewers enjoy this new avatar of mine something I have never done in all these years of my life in the entertainment industry and I hope they appreciate it too.”


Tune in to Who Teri Bhabhi Hai Pagle to know more from Monday to Friday at 10:30pm only on SAB TV