Kamal Hassan and ManiRatnamhonor the closing ceremony of ‘Film Preservation and Reservation Workshop, India 2016’ with their presence 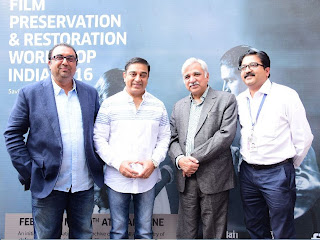 March, 6th, 2016: The Film Heritage Foundation saw major success with the 2nd edition of Film Preservation and Restoration Workshop India 2016; a crucial initiative, given the urgent need to preserve India’s rich film legacy. Viacom 18 was the principal sponsor of this 10-day workshop that was conducted by Film Heritage Foundation in collaboration with the National Film Archive of India (NFAI) and International Federation of Film Archives (FIAF), which was held at NFAI, Pune.

Versatile Actor Mr. Kamal Hassan and renowned Indian filmmaker Mr. Mani Ratnam were the Guests of Honour at the closing ceremony of the Film Preservation and Restoration Workshop 2016. The 10 day workshop had an international faculty of leading experts in the field who addressed current issues surrounding film preservation and restoration including practical training of current restoration and archival best practices. The unique part of this initiative was that it covered the preservation of both film and non-film material like posters, documents, lobby cards, photographs, etc. which are an integral part of our cinematic heritage.

Mr Sudhanshu Vats, Chairman CII National Committee on Media & Entertainment & Group CEO Viacom18 Media Pvt. Ltd said, “Preservation and Restoration of Indian cinematic heritage is an on-going priority for us. Our goal is to help create awareness as to how important it is to preserve our cultural heritage for the benefit of the future generations. We are thankful to Film Heritage Foundation for having us on board once again and we look forward for a continued association to ensure enhanced dialogue and cooperation between all those who care about and love Indian cinema”

Shivendra Singh Dungarpur, Founder Director, Film Heritage Foundation said,“This has been a great year and with a second successful workshop behind us, we now have to start work on our mission to build an army of skilled film preservationists and restorers that is needed to save our moving image legacy. As always, we at Film Heritage Foundation cannot thank Mr. Sudhanshu Vats and his entire team at Viacom18 for their continued support for our cause and for understanding the importance of encouraging those who value India's rich cinematic legacy to learn, explore and contribute towards saving it for posterity.”

Kamal Hassan, veteran actor and one of the Chief Guests of the occasion said,“I am very pleased to be invited to be Chief Guest at the closing certification ceremony of the Film Preservation and Restoration Workshop in Pune and to present the FIAF certificates to the participants. A workshop of this kind is crucial for our country that has lost so much of our cinematic history and we need to grow a resource of passionate film archivists who are committed to saving our cinematic heritage. I would like to congratulate Film Heritage Foundation for this remarkable initiative and for conducting the workshop at the National Film Archive of India.”

Viacom 18 Media Pvt. Ltd. is one of India’s fastest growing entertainment networks and a house of iconic brands that offers multi-platform, multi-generational and multicultural brand experiences. A joint venture of Viacom Inc. and the Network18 Group, Viacom18 defines entertainment in India by touching people on-air, online, on ground, in shop and through its cinema.

Film Heritage Foundation is a not-for-profit organization based in Mumbai set up by Shivendra Singh Dungarpur. Recognizing the urgent need to preserve India’s cinematic heritage, Film Heritage Foundation is dedicated to supporting the conservation, preservation and restoration of the moving image and to develop interdisciplinary educational programs that will use film as an educational tool and create awareness about the language of cinema.