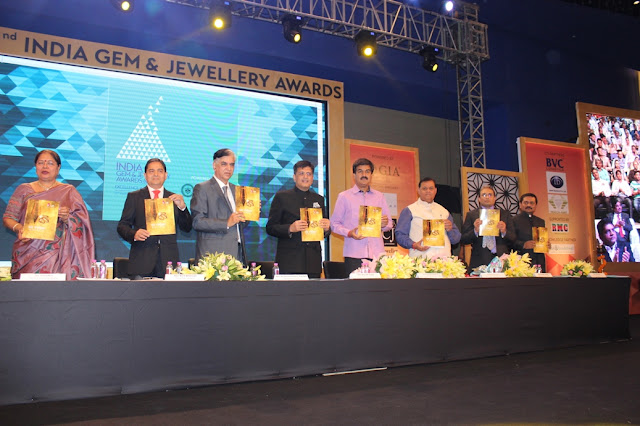 
The GJEPC 42nd Annual Awards, exclusively open for GJEPC members, felicitated excellent and meritorious performances of gems and jewellery exporters, on the basis of their export performance, value additions, and investment on R&D among other parameters during the year 2015. A proprietary quantitative model developed by D&B, was used to shortlist the award winners, based primarily on computation of composite scores calculated by considering various financial and quantitative indicators. The final set of award winners was chosen by the esteemed jury.

Shri Praveenshankar Pandya, Chairman, GJEPC, said, “The 42nd India Gem & Jewellery Awards recognised the best performers of 2015 and paid rich tributes to the industry’s movers and shakers. I am glad to announce that we have received a phenomenal response this year with over 364 nominations – an increase of around 34% from last year - from all across India. It was important to celebrate their performance as it came amidst a declining world economy. India has more than 3 million artisans and craftsmen who have taken it to a leadership position in the diamond business. We are ranked fourth in jewellery but aspire to take the top spot subject to favourable policies and the right stimulus. We are doing extremely well in fashion jewellery but need to learn more in terms of fine jewellery.  But the Industry is currently grappling with problems of demand slowdown in the global markets. That’s why we urge the government to reconsider the excise duty levied on the industry in the Budget”
He further added that the duty would create challenges of compliance for an industry, 75% of which are in the unorganized sector and also it will open up scope for harassment by the tax officials.


Shri Piyush Goyal, Hon. Minister of State (Independent Charge) for Power, Coal, New & Renewable Energy, Govt. of India, said, “Firstly, I hail 50 golden years of India’s gems & jewellery industry. GJEPC’s 42nd IGJA have a message for the winners and aspirants who have to constantly work harder to strive for excellence. The gems and jewellery industry should engage the Government in dialogue and help it get rid of the malaise in administration to make the system more responsible and accountable. The industry should come up with suggestions to bring more integrity into the system and help realise the Prime Minister’s dream. We have to work in collaboration to create a corruption-free new business environment for the Gen-Next. Build bridges of trust with the policy makers and then it will be easier to get your demands met. Ease of business will come in only through a two-way process.”


Shri Rajpal Singh Shekhawat, Rajasthan State Minister - Urban Development and Housing Minister, said, “India’s gems and jewellery industry is a rare combination of export capital intensive and labour intensive, which plays a significant role in the country’s balance of payment. Rajasthan exports Rs. 5,000 crore of gems and jewellery. It is known for Kundan and Meena jewellery design styles as well as for precious stones such as Tanzanite. We are planning to unveil a diamond bourse in the State as part of our constant endeavour to make Rajasthan the best destination for investment.”


Shri Kirit Bhansali, Convener – IGJA, GJEPC, said, “Last year was a very challenging one but our industry has coped up well as we have done so many times in the past. The gems and jewellery industry will soon become the topmost contributor to the nation’s economy. The Awards help us to experience and witness the passion, effort and dedication that entrepreneurs and enterprises have.”


Salient features of IGJA 2015 include:
GJEPC’s India Gem & Jewellery Awards, remodeled in 2014, has gained recognition and popularity from across the country and the world. Besides recognizing the efforts of the exporters, the Council also honoured the top foreign buyers from across the globe, international trade associations and the banks financing the gems and jewellery players. In addition to the acknowledgment of their global standards, GJEPC awarded those who contribute to the overall benefit of the Indian gems and jewellery industry.


About The Gem & Jewellery Export Promotion Council India (GJEPC India)
Set-up in 1966, the GJEPC has over the years effectively molded the scattered efforts of individual exporters to make the gem and jewellery sector a powerful engine driving India's export-led growth. This apex body of the gem & jewellery industry has played a significant role in the evolution of the Indian gem and jewellery industry to its present stature. GJEPC is continuously working towards creating a pool of artisans and designers trained to international standards so as to consolidate the Indian jewellery industry and establish it as a prominent global player in the jewellery segment.
With strength of 5200 members spread all over the country, the Council is primarily involved in introducing the Indian gem & jewellery products to the international market and promotes their exports. To achieve this, the Council provides market information to its members regarding foreign trade inquiries, trade and tariff regulations, rates of import duties, and information about jewellery fairs and exhibitions.
Press Contacts
Ms. Dolly Choudhary, GJEPC – Tel: +91-988 77538 23 Email: dolly@gjepcindia.com