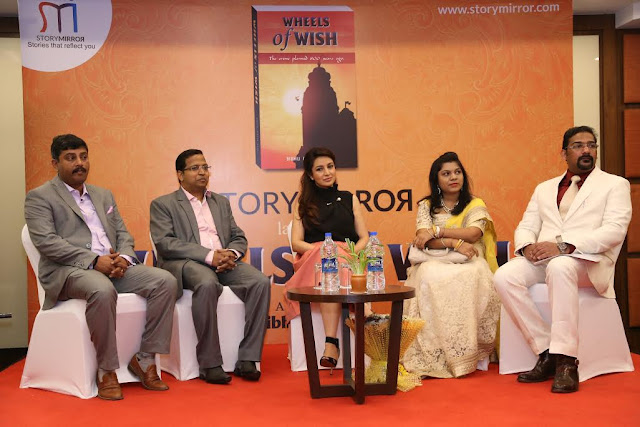 March 20, 2016, Mumbai: Bollywood actress Tisca Chopra launched “Wheels of Wish”, the first book of Bibhu Datta Rout, published by StoryMirror.
The book is about an Investment Banker Shashank Chaudhary accused of two murders and a rape. It’s a scintillating time thriller which begins 800 years in Kalinga and culminates in Joda, Odisa. The unique storytelling will take the readers in 3 vivid time zones.
On this occasion Tisca Chopra Said”
Banking professional turned author Bibhu Datta Rout on his first book launch said “
Devendra Vishal Jaiswal, co-founder of StoryMirror said”
The book is available at


About the Book
In the year 1232, A King planned to build an enigma on the shore of Chandrabhaga Beach. Twelve hundred ‘Shilpis’ took oath to build the most magical art form of the world.The complex temple architecture got the best of science and mythology. Days turned into months and months into years. Convictions became stronger to spellbind the world.But, they failed to place the magnetic idol, which happened to be the heart of the entire design.
Twelve years of blood and sweat ended with the ultimate announcement from the King – The death sentence to all. However, destiny had different plans for them. A miracle boy came for the rescue. His magical touch saved their lives. When the task got completed, all eyes searched for their savior. But he was not there. He had committed suicide.This mystery remained unsolved until the year 2008, when investment banker Shashank was arrested in double murder and rape charges.About StoryMirror
StoryMirror is India’s number 1 short stories portal and first of a kind mobile app for short stories and illustrations, available in android. With a collection of around 40,000 short stories, poems and Illustrations; more than 3000 writers and artists, it distributes highest prize money as compared to other story portals & literature sites, for short stories & illustrations contest which includes 3 languages Hindi, English and Odia. The organization is gaining new heights and in its journey has become World’s first ‘Creative Ecosystem’, where in every writer and artist can freely explore and promote his or her creativity. StoryMirror has now entered Book and E-book publishing.
Highlights of StoryMirror: