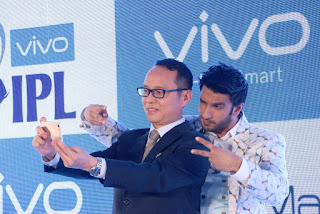 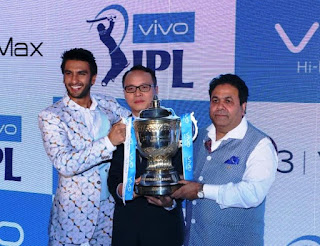 Ranveer Singh, the current heartthrob will feature in the brand’s new TVC in early April. He will also be a part of various customer engagement activities that the brand has planned for the year.
Commenting on the launch, Mr. Alex Feng, CEO of Vivo India said, “It gives me immense pleasure to announce the launch of our innovation, the V3 and V3 Max for the Indian market. The V series designed with creativity and equipped with state of art technology will be a landmark for Vivo India. India remains our prime focus and the launch of these models is a testimony of our commitment to cater to the ever growing demand of meticulous customers in India and worldwide. The V3 and V3 Max offer an unbeatable proposition of cutting edge technology, impressive looks and Hi-Fi music quality in the industry.”

He further added, “We are truly delighted to have Ranveer Singh as the face of Vivo in India. Ranveer enjoys a huge fan following amongst the young Indian audience and Vivo being the brand for the youth, this lethal combination is all set to create magic in the Indian market. We are expanding our operations in India with enhanced branding to reach out to a larger customer base. Currently we are present in over 10,000 outlets. With the help of Ranveer and 8,000 colleagues, I’m confident that we are going to make great progress in the coming IPL season and 2016.”
V Series - V3 and V3 Max

The fingerprint unlocking allows the user to unlock the phone as fast as 0.2 seconds from and 0.5 seconds in sleep mode. The newly incorporated screen-split feature allows users to do multitasking without having to switch back and forth. Users can chat and watch videos simultaneously at the same time on one screen.

V3 Max, the high-end phone features a 13.97cm (5.5) full HD display with the resolution of 1920×1080 pixels. It comes with 2.5D Corning Gorilla glass and a metal body which gives it both elegant and strong appearance and protects it from accidental falls.

The phone is equipped with a powerful Octa-core Qualcomm Snapdragon 652 processor and paired with 4GB RAM and 32GB ROM which is expandable up to 128 GB. The device runs on Funtouch OS 2.5 based on Android 5.1 which stabilizes the whole system and makes it run fast.

V3 on the other hand flaunts the same design but comes with a slightly smaller screen. It measures 12.7 (5) HD display with the resolution of 1280×720 pixels and powered by Octa-core Snapdragon 616 processor. The Vivo V3 is coupled with 3GB RAM and 16GB ROM.

About Vivo Mobile India
Vivo is one of the fastest growing multinational manufacturer of smartphones. Vivo entered India in the late 2014 and started its smartphone business incorporating two distinctive features in their products – Hi-Fi and Smart that is focusing on superior video and sound quality and a splendid blend of science and technology respectively. Vivo India has been serving the Indian customers with 8,000 employees and 10,000 retailers, in almost 400 cities in 22 states. The “Make in India” initiative also resonates with Vivo India plan. Its assembly unit in Greater Noida is the first step towards this commitment. Vivo has also successfully bagged the title sponsorship of the India Premier League for two consecutive years that is 2016 and 2017. With a host of unmatched user-friendly features, advanced technology and dynamism Vivo is one of the most rapidly emerging multinational all set to capture the world smartphone market.
Posted by http://www.starfriday2012.com/ at Thursday, April 07, 2016