Everyday 8:30am on SonyESPN&SonyESPN HD 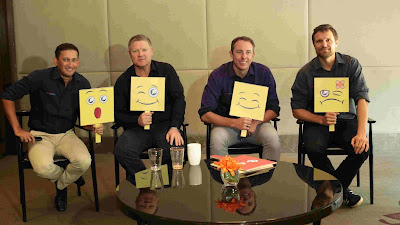 Background
IPL is the single greatest sports event in India annually and is watched by the widest range of television audiences. It has an equal mix of women and children, along with the classical 15-34 aged male audience.
In our effort to continuously build the ESPN brand in India, the IPL season is a great opportunity to engage fans in a way that keeps them coming back for more.
ESPNcricinfo presents ‘The Friendly Toast’ – a daily show on Sony ESPN that provides fans with a sharp reading of the game, making sense of the numbers and honest analysis of the day’s play. All of this in a fun and entertaining manner through the gamified interface of experts ‘owning’ teams for the duration of the show.
The Objective
This show is focused on connecting with the fans through the rich legacy and quality insights/analysis that Cricinfo has always provided fans, now on television.
The Target Audience
Primarily the IPL audience that is following the game day to day, looking for analysis of the day’s play as a means to augment their cricket discussions.
The Main Message
Catch the best of IPL analysis with a twist – the game within a game.

Ajit Agarkar
Full name Ajit BhalchandraAgarkar
Born December 4, 1977, Bombay (now Mumbai), Maharashtra
Current age 38 years 146 days
Major teams India, Delhi Daredevils, Kolkata Knight Riders, Middlesex, Mumbai
Playing role Bowler
Batting style Right-hand bat
Bowling style Right-arm fast
Slight, fiery and gifted, Ajit Agarkar never came to terms with being Kapil Dev's replacement as India's match winner with bat and ball. The ingredients were there, and in the right proportions, but never formed a heady and long-lasting mix. Agarkar's entry into international cricket - with an avalanche of wickets that made him the then fastest to 50 in ODIs - was matched for speed only by an astonishing batting slump during which he collected seven consecutive Test ducks against Australia. But he could bat, because tailenders simply do not score half-centuries in 21 balls, as Agarkar did in a one-day game against Zimbabwe, or score Test centuries at Lord's, as Agarkar did in some style in 2002. His aggression was an asset, but his body could not sometimes support it. He turned into a one-day specialist - arguably India's most effective ODI bowler in 2005-06 - but a disappointing World Cup campaign resulted in him being dropped for the Bangladesh series that followed.
Agarkar was part of the ODI squad that toured England in the summer of 2007, but his prospects of adding to his 191 ODI appearances faded after he was dropped following the series defeat. Agarkar remained a domestic force to be reckoned with, though, as his five-wicket haul in one of the most thrilling Ranji Trophy finals in Mysore in January 2010 attested to. Agarkar claimed 5 for 81 as Karnataka, chasing a target of 338, were bowled out for 331 in the post-lunch session of the fourth day's play. He captained Mumbai in the 2012-13 season, leading them to their 40th Ranji Trophy title. Just prior to the following season, Agarkar announced his retirement from all cricket.

DaryllCullinan
Full name Daryll John Cullinan
Born March 4, 1967, Kimberley, Cape Province
Current age 49 years 55 days
Major teams South Africa, Border, Derbyshire, Easterns, Gauteng, Kent, Titans, Transvaal, Western Province
Batting style Right-hand bat
Bowling style Right-arm offbreak
Less of an enigma than is sometimes claimed, DaryllCullinan was the centrepiece of South Africa's batting from the early to mid 1990s. He came out second best in his duels with Shane Warne, but although much was made of the animosity between the two, a more sober assessment of Cullinan suggests that his failures on two Australian tours were largely the result of an almost desperate desire to prove himself against a cricketing nation he holds in high regard. In other words, Cullinan tried just too hard to succeed against Australia.

Against all other attacks in all kinds of conditions he scored runs, as demonstrated by his century in the first Test against Sri Lanka at Galle in 2000 when his hundred came against MuttiahMularitharan, the world's best offspinner, operating on a turning track. In 1994, when South Africa were decimated by Devon Malcolm and bowled out for 175, Cullinan made a graceful 94 and was the only South African not to lose his wicket to Malcolm.

Cullinan tried to opt out of one-day cricket at the end of the 2001 season, but the board, understandably, put pressure on him to sign a new two-year contract. However, he retired from all international cricket in 2002 under a cloud of dispute with the board. Recalled that season to play Australia after recovering from a knee injury and a lack of form, he suddenly withdrew from the team on the eve of the second Test. In 2007, Cullinan took up a coaching role with the ICL.

Dirk Nannes
Full name Dirk Peter Nannes
Born May 16, 1976, Mount Waverley, Melbourne, Victoria
Current age 39 years 348 days
Major teams Australia, Netherlands, Australian Cricketers Association Masters, Canterbury, Chennai Super Kings, Delhi Daredevils, Lions, Melbourne Renegades, Middlesex, Mountaineers, Otago, Royal Challengers Bangalore, Somerset, Somerset 2nd XI, Surrey, Sydney Thunder, Sylhet Royals, Victoria
Playing role Bowler
Batting style Right-hand bat
Bowling style Left-arm fast
A self-confessed "accidental cricketer", for most of Dirk Nannes' adult life, cricket has been an afterthought. He used to play a couple of club games at the start of the season, a handful at the end, and in between travel the world pursuing his other passion, skiing. He was no run-of-the-mill ski bum - he competed for several years in World Cup skiing events. But when he started to take his cricket seriously, he quickly grabbed the attention of Victoria's selectors. It led to a first-class debut at 29 in 2005-06, and in his second game he suffered the group humiliation of watching Queensland storm to 6 for 900 declared in the Pura Cup final.
There was more joy in the Twenty20, where he was instrumental in the Bushrangers winning the title. Nannes destroyed Western Australia with 4 for 23 in the final, and his promising FR Cup season - 11 wickets at 20.54 - hinted that he would be a big part of Victoria's attack moving forward.
Nannes gave up hope of playing for Australia after being overlooked for the World Twenty20 in England in 2009. Instead, he turned out for Netherlands (he is the son of Dutch migrant parents and carries a Dutch passport) and was part of the side that shocked England in the tournament opener. Though he went wicketless in that game, he was soon on Australia's radar, making his debut in an ODI against Scotland at Edinburgh. Quickly establishing himself as one of Twenty20 cricket's leading bowlers in the international arena, Nannes was the leading wicket-taker at the World Twenty20 in the Caribbean in May 2010, picking up 14 scalps at 13.07.
Despite picking up 93 wickets at a shade over 25 in less than three years of first-class cricket, Nannes decided to retire from the longer forms of the game in February 2010 and become a limited-overs specialist - a route that is becoming increasingly more common for fast bowlers. Unlike a typical fast bowler, however, Nannes speaks Japanese, studied the saxophone at university and runs a successful ski-travel company.

Iain O'Brien
Full name Iain Edward O'Brien
Born July 10, 1976, Lower Hutt, Wellington
Current age 39 years 293 days
Major teams New Zealand, Leicestershire, Middlesex,Wellington
Batting style Right-hand bat
Bowling style Right-arm fast-medium
A fast bowler from Wellington, Iain O'Brien earned his first Test call-up in March 2005 when New Zealand's pace stocks were hit by injury problems. He had had a solid State Championship that season, taking 20 wickets at 26.55, but his impact in his two Tests against Australia was limited. O'Brien managed only one wicket in each match and faded from the national selectors' radar until 2006-07, when he was included in Test and ODI squads for Sri Lanka's tour of New Zealand. He wasn't used, however, and had to settle for being the leading wicket-taker in the State Championship with 34 victims at 20.85. Those figures were enough to keep him in the frame and he finally added to his Test tally in South Africa in November 2007 after he was a late replacement in the touring party because of an injury to Kyle Mills.
O'Brien shunts between New Zealand and England to be with his English wife, who lives in Derbyshire. Writing is one of his hobbies and apart from managing his own blog, he contributes to a local Derbyshire cricket website. In December 2009, he retired from international cricket to spend more time with his family in England, and joined Middlesex as a replacement for MuraliKarthik.

In India, ESPN operates a market leading digital business and is in a long-term collaboration with Sony Pictures Networks. Since October 2015, Sony and ESPN came together to serve fans in India via SONY ESPN branded sports channels and a new multisport website and app (launching in 2016). The collaboration between two of the most respected brands in Indian media and sports provides a powerful portfolio of sports rights and sports media assets in India.

Digitally, ESPN has been the market-leading digital sports company in India for years. ESPN owns and operates ESPNcricinfo, India and the world’s leading digital cricket brand, serving cricket fans with the best digital sports content and products across the rapidly expanding number and variety of devices.  In addition, ESPN and Sony will launch a multisport site and app for India in June 2016 and ESPNFC.com (football/soccer) serves a growing audience of fans in India. ESPN’s technology, editorial and product teams in Bangalore and Mumbai also serve as an integral part of ESPN’s leading global digital media portfolio and business.

Across the Asia/Pacific Rim region, ESPN operates a diverse business that includes a portfolio of innovative collaborations (including a multi-year agreement with Tencent in China), leading online and mobile brands and services, a leading television and digital media business in Australia, New Zealand and the Pacific Islands and more.