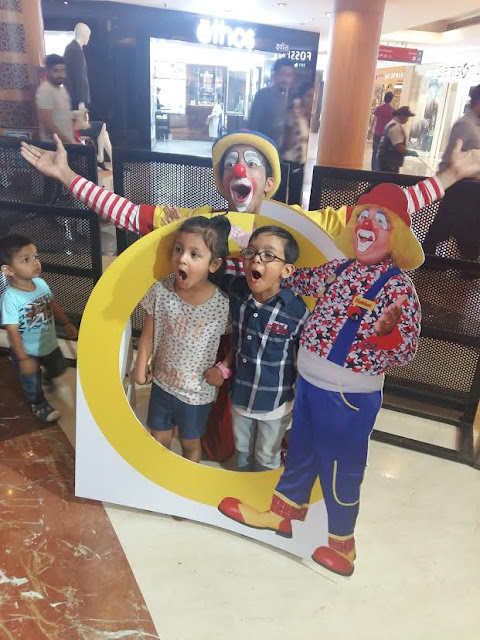 ~Martin – “The Flubber” and other International clowns spread laughter and joy among kids at the grand opening of International Clown Festival at Inorbit Mall, Malad and Vashi~

Mumbai, December, 2016: Christmas celebrations has arrived early at Inorbit Malls! Last weekend Inorbit mall Malad and Vashi witnessed a lot of fun, drama and entertainment at the mega opening of the much-awaited International Clown Festival. Kids favorite clown Martin, also known as Flubber, along with other clowning talent from other countries swept the audience off the floor with some rib tickling performances. Not only kids but adults too enjoyed various acts of juggling, unicycling and acts that tickled the funny bones. The kids not only watched the performances but clicked pictures with their favorite clowns. Apart from performances there were also workshops on crafting balloon art, face painting and juggling.

The International Clown festival is a 10 day extravaganza which Inorbit mall will be hosting in Malad, Vashi, Bangalore, Vadodara, and Hyderabad. The ongoing clown festival will go on till 25th of December. You visit your nearest Inorbit malls to watch live clowning acts and also participate in engaging workshops. After spectacular performances in Malad and Vashi, Martin and his team of International Clowns will be performing for 2 days at Vadodara, Hyderabad and Bangalore.

Commenting on the occasion, Mr. Puneet Varma, Associate Vice President, Marketing and Corporate Communications, said, “Clowning acts are quite popular, not only among kids but people from other age groups love it too. Last year we hosted the festival in Bangalore where we saw participation by approximately 1500 kids. This year Inorbit decided to take this across 5 locations. The opening of Clown Festival at Malad and Vashi has garnered tremendous response. Martin and his team’s performance was outstanding. With consumers being deprived of such performances due to lack of Circuses, Inorbit has created a platform for wholesome entertainment.”