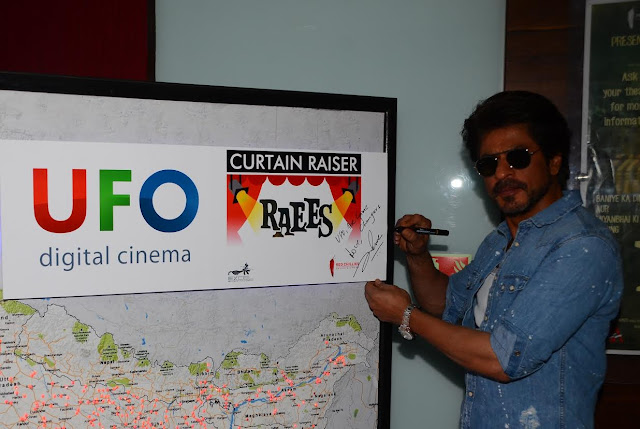 The remarkable affair began mid-morning with a brief introduction of UFO Moviez, the initiative and release of thrilling trailer of “Raees”. The Baadshah of Bollywood, Shahrukh Khan, stationed at UFO Moviez’s central studio, interacted with the audiences for an hour, with fans fervently asking for more. The audience sitting in theatres in the selected 10 cities could see and interact with the actor himself. The staggering enormity of the initiative truly came across when viewers at one location could hear those at another, while they interacted with Mr Khan.

To promote the Trailer Launch, a short teaser was shot wherein King Khan himself invited people to the theatres to be part of this first of its kind of trailer launch. The teaser went live on UFO screens across India 1st December 2016 onwards and has reached approximate 6 million unique viewers till 6th December 2016.

Founder & Managing Director of UFO Moviez, Sanjay Gaikwad, said on the initiative: -“It was great to execute and present the World’s first-ever Interactive Big Screen Trailer Launch. We are glad that through ‘Curtain Raiser’, the King of Bollywood, ‘Shah Rukh Khan', was able to interact live with audiences in 10 theatres through the Big Screen while audiences across UFO  screens enjoyed this exhilarating event live on-screen. The audience response to the event was astounding. We are delightedwith the commencement of our platform ‘Curtain Raiser’ and hope to see the same overwhelming response in the future.As India’s largest digital cinema distribution network and in-cinema advertising platform, UFO Moviez takes pridein emerging as the leaders of the new digital era.”

Commenting on the initiative, Veteran Producer - Distributor Mr Pahlaj Nihalani, and President of Movie Image Makers said, – I am really impressed with UFO’s latest initiative ‘Curtain Raiser’. The LIVE promotion vide the digital technology encourages additional footfalls at the cinemas many of which are going through low occupancy. It was a real gratifying experience for the cinema audience as it brought them closer to their stars and gave them an opportunity to interact with them. This kind of innovative promotions will help enhance revenues for the entertainment industry.

Commenting on the Raees Trailer Launch on UFO’s Curtain Raiser, the film’s Producer, Mr. Ritesh Sidhwani, said, “The trailer of the film has released in as many as 3,500 screens Pan India. The launch is a revolutionary concept which has helped us reach out to a larger audience and celebrate the movie goer in its purest form through the advanced technology of UFO Moviez. We have had a fantastic association, and hope to collaborate on future projects that bring innovation and excitement to the theatre going audiences."