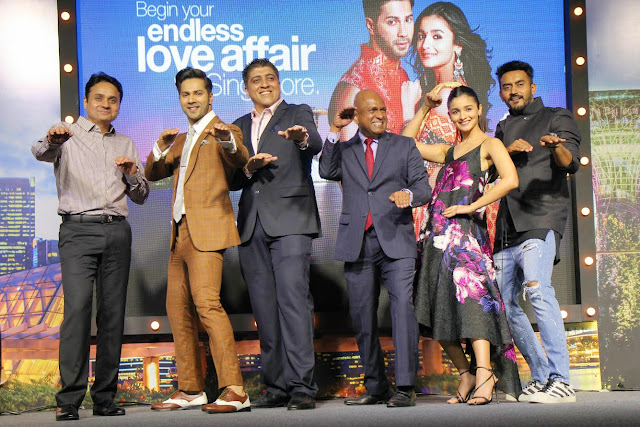 Mumbai, 27 Feb, 2017: The Singapore Tourism Board (STB), together with SilkAir, the regional wing of Singapore Airlines, organized a press conference today to announce their close collaboration with Dharma Productions for a major Bollywood movie, ‘Badrinath Ki Dulhania’. The movie features key scenes and songs filmed in Singapore. The film, directed by Shashank Khaitan and starring Bollywood stars Alia Bhatt & Varun Dhawan, will hit the screens on Friday, March 10, 2017 across India.


Despite filming taking place even over the Diwali holidays in November last year, the two stars Alia and Varun had an enjoyable time shooting in Singapore. They were pleasantly surprised by the destination’s varied offerings in dining, retail, attraction and entertainment. While the city impressed them, they also appreciated the friendly atmosphere provided by the people of Singapore for a successful shoot. As a city that constantly evolves and provides a plethora of filming locations with convenience, it continues to be an exciting destination for Bollywood movies.


Explaining his rationale for including Singapore in the movie, Director Shashank Khaitan highlighted, “Singapore offers an interesting mix of a unique multicultural society interwoven into a dynamic city that pulsates with modern vibrancy – something that works well with the characters of Badri and Vaidehi as they embark on a journey of self-discovery. It’s not just a destination but Singapore is intricately woven into the essence of the plot”.


Talking about Singapore’s association with the movie, G.B Srithar, Regional Director for South Asia, Middle East & Africa, Singapore Tourism Board (STB) said, “We are happy to be associated with Badrinath Ki Dulhania, a movie that will appeal to all segments of Indian society with its over-arching theme of love and the joy of life. Over the past few decades, Bollywood movies have helped build an emotive connect among the Indian audiences with Singapore. We believe through Badri and Vaidehi, they will re-discover Singapore’s variety of experiences and evolving cityscape. Keeping in line with the movie’s theme, we are pleased to welcome Indian travelers to begin their endless love affair with Singapore, by visiting and re-visiting Singapore for memorable holidays.”

Alia’s character in the movie goes through a transformation in Singapore, where the story of her involvement with SilkAir, the regional wing of Singapore Airlines, unfolds. SilkAir is also the official airline partner for the movie. Speaking about the association,
SilkAir’s General Manager for India, Jagdish Bhojwani also added, “SilkAir is happy and excited to be associated with the Bollywood project. India is a key market for us and we continue to view it as one with great importance. We strongly believe that the association will help us reach out to more people as we embark on efforts to spread our wings across India.”


About the Singapore Tourism Board
The Singapore Tourism Board (STB) is a leading economic development agency in tourism, one of Singapore’s key service sectors. Known for partnership, innovation and excellence, STB champions tourism, making it a key economic driver for Singapore. We aim to differentiate and market Singapore as a must-visit destination offering a concentration of user-centric and enriching experiences through the “YourSingapore” brand. For more information, visit www.stb.gov.sg  or www.yoursingapore.com or follow us on Twitter @STB_sg (https://twitter.com/stb_sg).


The airline took to the skies in February 1989 as Tradewinds the airline, before evolving into SilkAir in 1992. In its early days, the airline catered to passengers holidaying in exotic destinations within South East Asia, including Phuket and Tioman. As the carrier developed, regional business destinations such as Phnom Penh, Yangon and Kuala Lumpur were added.


Today, the full service airline operates almost 400 weekly flights to 53 destinations in 14 countries with Vientiane and Luang Prabang in Laos and Fuzhou in China added to its network recently.