~The Derby enjoys a total prize purse of 3 crore, with the winner taking home
Rs. 1.66 crore along with the trophy ~ 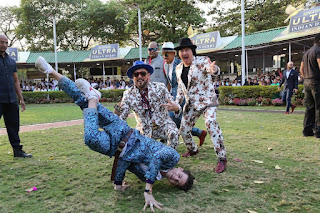 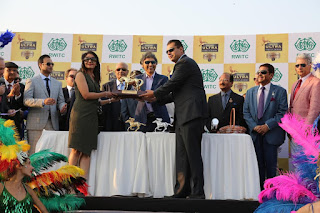 Mumbai, February 5, 2017:
Kingfisher Ultra, synonymous with high fashion and ‘Good Times’ celebrated a successful year of magnificent racing events in the country. After gaining high popularity in the first edition, Kingfisher Ultra Indian Derby raised the stakes at the second edition that was held in Mumbai, with its great line-up of thoroughbreds and attendance of the cities crème-da-la-crème.


Kingfisher Ultra Indian Derby the grand finale Sunday featured a power-packed and majestic line-up of 3-year-old thoroughbred colts, geldings, and fillies on the racetrack climaxing with the blue-riband race.
Hall of Famer kept her date with destiny in one of the most anticipated events of the Indian horse racing calendar - the Kingfisher Ultra Indian Derby, 2017. A captivated crowd was enthralled by the heart-stopping performance by star filly, who settled in the lead shortly after the start.. Once in the straight, Hall of Famer stepped up pace and showed fine acceleration to stretch out finishing on strongly winning by a length amidst loud cheers from the supportive crowd. Hall of Famer was the pre-race second favourite to win the Kingfisher Ultra Indian Derby and she lived up to the expectations with a fine display of speed and stamina. The filly literally outclassed the opposition to win the most prestigious race of the season.


Mr. Shekhar Ramamurthy, Managing Director, United Breweries Limited, Mr. Samar Singh Sheikhawat, Senior Vice President, Marketing, United Breweries Ltd. along with Mr. Vivek Jain, Chairman, RWITC were at the presentation podium to hand out the trophy to winning connections. The Winner was trained by S. Padmanabhan and was ably ridden by Jockey David Allan. The Kingfisher Ultra Indian Derby weekend was a spectacular arena for entertainment of sports and featured various artists such as: DJ Leona, who hosted the opening ceremony for the derby. The parade was led by the Cuban brothers on the track along with carnival dancers. The Derby came to an end with a scintillating performance by popular progressive Indi-Pop, band Maadhyam.
Speaking on the occasion Mr. Samar Singh Sheikhawat, Senior Vice President, Marketing, United Breweries Ltd said, “We are very excited to continue the partnership with RWITC as the sponsors for the second edition of the Indian Derby. The Ultra Derby weekend brought together sports and entertainment in a format that has never been seen before in the city. I would also like to thank and congratulate the horse owners & breeders, jockeys and RWITC for making this a memorable event.”


The top three finishers in the Kingfisher Ultra Indian Derby -2017 are:

The Kingfisher Ultra Indian Derby 2017 made for a perfect weekend with an amalgamation of entertainment and fashion, infused with a dash of adrenaline! The racing event saw the well-heeled and illustrious names of the city celebrate the sport and soak into the spirit of the game.


In the past, Kingfisher has crowned the best equine athlete and has been seen as an example of a great lifestyle sporting event in India. It attracts the best of the jockeys and the finest horses from across the world that train vigorously to compete for the coveted prize and provide an enthralling on-track experience. The second edition of the Kingfisher Ultra Indian Derby took forward the resplendent legacy, focusing on the best thoroughbreds, equestrian enthusiasts and the most fashionable soiree of the city.