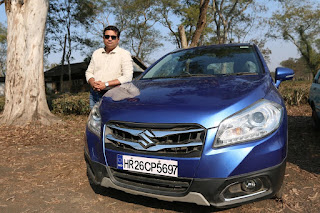 Nexa journeys on AH1, has been a visual delight for travel and car aficionados. This latest travel reality show that airs on Discovery Channel every Sunday is here to fuel your wanderlust desires with the breath-taking routes across three nations. In the last four episodes, the celebrities have explored some of the most awe-inspiring and lesser traveled roads on the way to Bangkok, via Asian Highway 1. This week Girish Karkera, Editor of BBC Top Gear India, who has traveled the world for reviewing cars, will be seen taking a trip through the unexplored paths that lead to Bangkok.
The upcoming episode will incite Girish’s love for cars and encourage him to embark on a journey to explore the AH1, and further persuade his companions to be the travellers and not just tourists. Along his way, Girish meets people across the AH1 who share the same amount of love and enthusiasm for their respective vehicles. Throughout this trip, Girish shoots and captures various precious moments. He plans to share these memories of his day to day adventures with his 8-year-old son, in order to pass on the same passion for exploring places.

While spending time with Girish, his plus one, who is a rally driver, realizes that a car is not just about speed and its unique features, but also about making it a medium to explore new places and discovering your own self along the way.

Join Girish on his journey of self


-exploration while he discovers some of the most mystical routes on his way to Bangkok, via Asian Highway 1 only on Discovery Channel on 18th June at 7:30 pm
Posted by http://www.starfriday2012.com/ at Friday, June 16, 2017