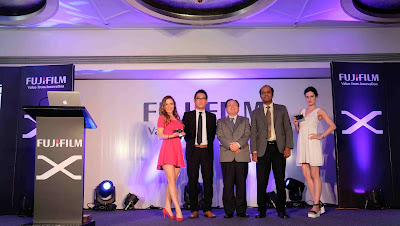 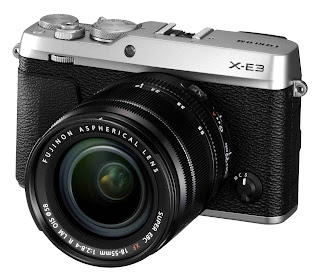 It comes equipped with the X-Processor Pro for best in class color reproduction in both stills and 4K movies. The XE 3 is made for photographers who want to seamlessly upload photos directly to their smartphone or tablet.

Mumbai, 12th October 2017: Fujifilm India Private Limited, a leader in a broad spectrum of imaging technologies, today announced the launch of the FUJIFILM X-E3, the latest addition to the X Series range of premium mirrorless digital cameras.
The X-E3 features APS-C 24.3 megapixel X-Trans™* CMOS III sensor and the X-Processor Pro high-speed image processing engine. The X-E3 is the first X Series model to feature Bluetooth ®** low energy wireless communication. You can pair the camera with your smartphone or tablet device for easy transfer of pictures taken. The LCD monitor, on the back of the camera, uses a static touchscreen panel which supports the conventional “Touch Shot”, “Touch AF” and “Focus Area Selection” capabilities. An all-new “Touch Function” feature is available on the X-E3, which enables gesture control like flick and pinch zoom, to further enhance touchscreen operation. The AF algorithm has been updated to enhance the camera's performance for tracking a moving subject. The X-E3's premium exterior design, agility and functional beauty make it a mirrorless camera that is “a pleasure to own and fun to shoot with” at the same time. It is available in Black & Silver colors and is priced at Rs.70,999/- (Body only), XE3 with 18-55 kit is priced at ₨.102,999/- and XE-3 with 23mm F2 kit is priced at ₨.89,999/-.

About Fujifilm
Fujifilm established in 1934 has believed in Innovation and creation of new values through leading edge and proprietary technologies. FUJIFILM India as a firm believer in sophistication continues to work hard to provide the Indian consumer the best products and services.
Our corporate slogan is “Value from Innovation.”
Along with expressing Fujifilm's commitment to continuously creating innovative technologies, products and services that empower the potential and expand the horizons of tomorrow's businesses and lifestyles, the slogan also encapsulates the company's desire to combine our own original technology with human resources, expertise and technology from around the world both internally and externally to create innovation. A new brand statement has also been created to articulate these commitments more specifically, and the slogan encapsulates the main points of the brand statement.
Our Goal is to be a company that is able to resolve a diverse variety of the problems that face society, contribute to the world through the continuous creation of value – added products and services, and achieve sustainable growth through constant innovation. That was the commitment we made to the world when we launched our new corporate slogan “Value from Innovation”. We quickly ascertain customer needs, and communicate these clearly and accurately to those involved in product development. Instant camera – instax is successful example of this in Photo Imaging business which was developed after accurately assessing market demands and with all related business divisions working together throughout the entire process from production to sales on a worldwide scale.