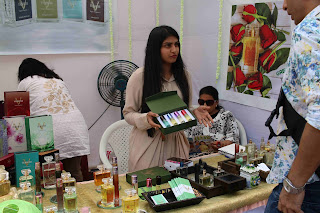 Mumbai, 12 November 2017:  The second edition of The Ahimsa Festival came to a culmination at Khar Education Society in the city. The Ahimsa Festival is the first event across India, and perhaps the world, to be based on ahimsa or compassion. The festival ran for 18 days and created awareness about the power of compassion and inspired people towards making lifestyle changes towards health and animal cruelty-free choices.

Convener of the event Dr. Rupa Shah who–is part of the six-member Ahimsa Parmo Dharma Group (APDG)–and has co-founded the annual Ahimsa Festival series stated, “The basic meaning of the word ‘ahimsa’ is–Do no injury, cause no harm. Ahimsa means non-violence, or to put it in a positive way–Compassion. Ahimsa is a universal concept that applies to all living beings, including all animals. All living beings have the spark of the divine spiritual energy; therefore, to hurt another being is to hurt oneself. The primary aspect of ahimsa is towards oneself–in particular towards one’s health. With the super-success that we enjoyed this year, we are all set to work harder for making it bigger and better next year.” The Ahimsa festival incorporates this principle into the festival that features a series of events that highlight the same value.

Monica Chopra, Curator of Fashion Show & Founder Of Eco Trunk said, “Being a fashion designer, one understands the excitement of a beautiful look put together but what's the point if it comes from pain and unhappiness? We, at The Eco Trunk, feel very passionately about animal rights and the environment and have put together a show highlighting organic, cruelty-free, sustainable materials that glide just as beautifully over the body. Makeup that we will use is cruelty-free and vegan that looks just as sparkling.” Monica featured organic and sustainable clothing range like organic cotton and hemp (daily wear, gowns, and traditional/ethnic wear); many of the famous models who showcased the designs were vegans. The make-up was done with brands that are free from animal products/ animal testing. The bags and wallets, featured in the show were upcycled and made from tyre tubes, and the luxurious ones made from cork materials. The Jewelry too was upcycled from a sari and made by the slum women in Mumbai.

The closing day had talks on raw food, spirituality, and live vegan cooking demos by chefs throughout the day. Prominent names like C.A. & Author Atul Shah, Vegan Restaurateur Harsish Shetty, Vegan Traveller Shivya Nath, etc. Sunanda Parthasarthy the daughter and disciple of Swami Parthasarathy enthralled people with her talk on how spirituality is not a retirement plan and compassion is at the core of every religion. At the closing ceremony, there were more than 20 pop-up food stalls, organic stalls, farmer’s market and a huge display of cruelty-free lifestyle products. There was a live music show by Flying Carpet Entertainment.

The show-stopper for the fashion show Ms. Pooja Bimrah Miss World Heritage 2015 & Miss Supermodel 2017 India said; “This is a unique fashion show that showcased products that are not only beautiful on the outside but also are made with processes and materials that have not caused trouble to any soul. They have not used materials like wool, leather, and cosmetics which are tested on animals. I really feel that there should be an increasing awareness about this and everyone should only use cruelty-free products.”

The festival which was inaugurated by Amruta Devendra Fadnavis and Dr. Will Tuttle - author of the international best-seller ‘The World Peace Diet’ along with Dr. Nandita Shah founder of Sharan and the recipient of the prestigious Nari Shakti Award 2016 the highest award for women in India; saw more than 100 satellite events taking place across the city ranging from film workshops, talks, webinars and seminars to treks with Kuntal Joisher – the first vegan to conquer Mount Everest, a run, and cyclothon, and potlucks–to spark curiosity and awareness about Ahimsa, Veganism and compassionate lifestyle across the city. The festival has touched the lives of more than twenty thousand people across the city.

Ahimsa Parmo Dharma Group
The Ahimsa Festival is an annual festival founded by like-minded individuals with an aim to spreading the fragrance of peace and love through simple lifestyle choices. The Ahimsa Parmo Dharma Group (APDG) was founded in 2015 to create awareness about the principles of ahimsa in everyday life. The group comprises six members who are leading professionals in their field of work, and have come together with the single vision of practicing and preaching non-violence in thought, deed and action. They are living examples of “ahimsaks” who are successfully practicing the Ahimsa way of living for many years.

Atul Doshi; He is a CA and an Honorary Director in an online company providing free education content across the globe, Atul Doshi has also penned a booklet titled, ‘We Vegetarian (?) People’ in English and Hindi.

Saroj Choudhary: She is one of the earliest advocators of vegan and wfpd (whole foods and plant-based diet) lifestyle in Mumbai.


Dr Rupa Shah: She is a Healer, Author, Speaker and Founder of circleohealth.


Pradeep Shah: An Electronics Engineer, who is a practicing ‘Nature’s Diet System’ for three years.


Reyna Rupani: The head of SHARAN-Mumbai, an NGO which advocates food as medicine. She conducts SHARAN workshops and helps in spreading awareness about the power of natural food in the world.


Ruchika Chitrabhanu: Her close association with leading saints further strengthened her belief that compassion is the basis of all religions. She has been a vegan for the last 10 years.