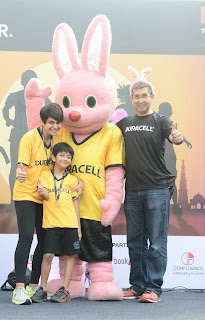 
New Delhi, 26th March 2018 - This season Duracell, the iconic consumer battery company and the leading manufacturer of high performance alkaline batteries worldwide, gave Delhiites the perfect opportunity to realize their true potential and enjoy a fun-filled day with their loved ones. The brand successfully concluded its family-run titled ‘Durathon’ on 25th March in the Connaught Place area of New Delhi, which saw participation from around 1000 people, who are running enthusiasts.
The ‘family-run’ was based on the concept of ‘running stronger for longer,’ which is symbolized by Duracell’s ever-running Bunny mascot. This one-of-its-kind event allowed families to run together, driven by the spirit of family bonding and the concept of longevity and unstoppable power. The Delhi run saw an overwhelming participation from the city’s residents due to its family-theme. The run highlighted how a lifestyle of greater strength and power can be achieved by family members coming together, unlocking their true power and improving their performance, concepts that are central to brand Duracell’s batteries.
David Abraham, Duracell Marketing Director for Middle East and India said, “We are proud to have successfully concluded the Durathon in Delhi city this year. Duracell’s family run has gained popularity and we see more and more people participating each year. It is Duracell’s philosophy of empowering people and their devices to run ‘stronger for longer’ which Delhiites greatly appreciated. The run allowed them to bond as families, unlock their inner power and run like the ever-running Duracell Bunny.’’
Mandira Bedi, Indian actress, anchor and fitness-enthusiast who graced the Durathon by running alongside her son, Vir, said. “It was truly an amazing experience to run with my son, Vir at Durathon Delhi. I am a fitness enthusiast and believe that running can make you stronger for longer, and what could have been better than to associate with a brand whose core philosophy is just the same. My son and I were immensely inspired by the energy of the unstoppable Duracell Bunny Mascot and seeing so many-families running together made us enthusiastic to another level.’’
Kick starting early morning, the participants were energetic and enthusiastic for the run. Duracell celebrated this run with around 1000 participants. For the pre-buzz, Duracell did a lot of school activations, to create awareness amongst parents and their children about the run and encouraged them to register and participate. This included fun activities at schools that created much anticipation in them. The Durathon also saw participation from the doctors of Fortis, Shalimar Bagh Hospital along with their families.