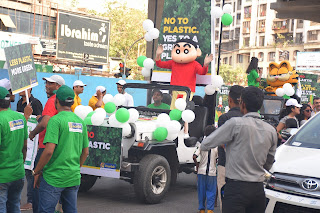 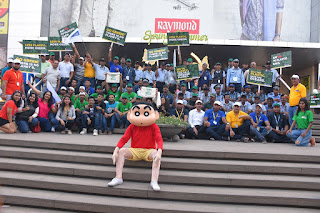 Mumbai, May 19, 2018 – Inorbit mall, Malad in association with Green Yatra – an NGO devoted for a greener tomorrow organized a ‘Say No to Plastic’ walk. Supporting this noble initiative, people of different age groups joined the stride that was led by the famous toon characters Shin Chan and Garfield. Along with the toon friends customers, people working around in offices, NGO volunteers, societies around the mall walked and supported the initiative. More than 500 participants and volunteers showed great enthusiasm in propagating the message ‘Say No to Plastic’. The volunteers distributed more than 5000 eco-friendly bags among the crowd encouraging people to avoid the use of plastic bags.
The event created quite a buzz among kids, as they got a chance to meet their favourite toon friends. The 1.5 km walk commenced from Inorbit mall and has garnered tremendous response from the patrons. With the government of India’s plastic ban, Inorbit mall wanted to support this cause for a better tomorrow. The BMC P South ward, traffic department and Police division of Malad supported the cause.
Commenting on the occasion, Naviin Ibhrampurkar, Head of Marketing and Corporate communications, Inorbit Malls said, “As responsible citizens of the society it is our duty to support such noble initiatives. Inorbit mall has taken a step to spread awareness among people by hosting such a walk. It gives us great pleasure to see the tremendous response that we have received. We would like to thank Green Yatra for extending their support. We hope to host more such initiatives and make a difference in the lives of people.”
Posted by http://www.starfriday2012.com/ at Monday, May 21, 2018