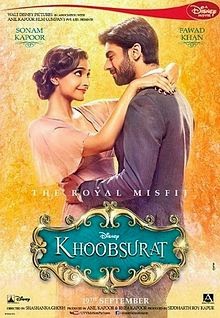 Manju [ Rekha in old Khubsoorat] is Milli [Sonam Kapoor] she boozes, she lets her hair down and smooches the leading man Vikram Rathore [Fawad Khan] without any inhibition. Haphazardly sketched characters from the original and twisted for a modern look the movie has a confused screenplay wavering from the original to new adaptative.

Sonam Kapoor is at the helm from one frame to other leaving little space to the neighbor imported from Pakistan ‘Fawad Khan’. This actor has marked his entry for sure but ultimately its Sneha Khanwalkar the music director who has taken away all the limelight by giving some funkiest track ‘"Engine Ki Seeti"  “ Maa Ka Phone” and the rural of Rajasthan adds to the glitter.

Strictly not recommended for the audience who have experienced the  golden era of Hindi Movies which are never going to be re-lived on silver screen by any other film makers.