George Clooney has ‘The Talk’ with Mae Whitman’s Boyfriend 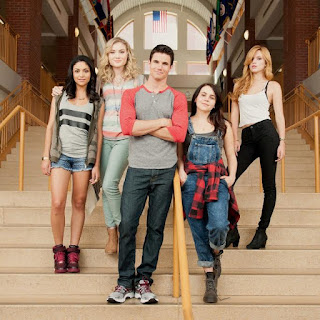 The adorable child actor from ‘Independence Day’ and ‘One Fine Day’ Mae Whitman has graduated to the role with the latest youth cult film, The DUFF “DESIGNATED UGLY FAT FRIEND”. The Movie has been pegged as the next “Mean Girls”. The Movie captures the journey of a young girl who has been branded the DUFF of her group and her struggle to break fee from the high school tag.

She thinks her work as a child actor both added to the bullying and helped her deal with it. “I’d be like, ‘Sorry you don’t like the shoes I wore, but I have to get up tomorrow and go to work, and I don’t have time to let that affect me.' ”

Mae has been making mark for herself as an actress for some time now. The actress has a pivotal role in the Emmy nominated series ‘Parenthood’ and “arrested Development”.
One of her early jobs was in 1996’s “One Fine Day,” playing George Clooney’s daughter. The two have remained close. “He’s the coolest, nicest guy on the planet,” she says. “I saw him a few years ago, when I was dating my now-ex-boyfriend, and he took the guy around the corner and gave him a talking-to — he warned him not to break my heart. He’s really the best.”

That romance ended, and now she’s in a better one, she says. “I’m dating a musician who’s really smart and nice, and it’s a cool adult relationship,” she says. “I realize I sound like I’m 10 years old, but it feels really healthy and respectful. I have been in a lot of tumultuous relationships.”

Maybe that’s helped Whitman with her reputation as “the best crier in the business”.