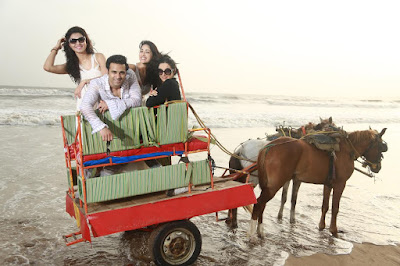 A perception of a film set can be a tense atmosphere where work is happening for non-stop 12 hours. But it is not in the case of Bhushan Kumar’s upcoming film Sanam Re. The films cast and crew knows how to work hard and party harder. The exhaustive film schedule has been shot in Shimla, US, London, Leh, Mumbai and Canada, but the actors certainly know how to take a chill pill in between shots.

On choosing the unusual cast which comprises of Pulkit Samrat, Yami Gautam and Urvashi Rautela, director Divya Khosla Kumar says, “I wanted actors who have not done hard core commercial cinema. In the past whenever I  interacted with Pulkit I got a hint of sadness in him. For this character I wanted that intensity. I didn’t want somebody with an image, so Pulkit really appealed to me. He was the first person I narrated the story to and he immediately came on board.”

The Yaariyan director continues, “The girl’s role in the film has a lot of layers and has various spectrums to it. Yami is a very good actress; I wasn’t looking for someone who has done a lot of work. I feel when you are new, then you know that there’s a lot of hidden potential and you can bring out a lot. That was very exciting for me as a director.”

The stills of the film are out which shows a sizzling chemistry between the lead pair of the film. Yami says, “Not many people know that Pulkit and I had worked in the earlier phase of our career. It was five years back, when I was new in Mumbai. We had worked on a music album. That was the first time we had met, and we only exchanged a ‘hello’ between us. Both of us are very big introverts; we take our own sweet little time to open up. It was a two-day shoot in Goa where we did not interact much. Before starting to work in this film, we did couple of workshops together. I must say Pulkit is a fantastic actor
to work with. Your co-actor should be friendly, supportive, and It is very necessary to have a sense of compatibility between two actors, certain wavelength should be there, so I share such a bond with him.”

in Sanam Re we bonded over lunch and cracked jokes with each other. “It is a memorable film for me and I am looking forward for its release.”

Directed by Divya Khosla Kumar, Bhushan Kumar’s Sanam Re stars Pulkit Samrat, Yami Gautam, Rishi Kapoor, and Urvashi Rautela. The film is slated to release in February 2016.
Urvashi Rautela who plays a prominent role in the film says that, “I never had so much fun on any film set as I did in Sanam Re. We bonded over lunch and cracked jokes with each other. It is a memorable film for me and I am looking forward for its release.”
Posted by http://www.starfriday2012.com/ at Thursday, July 09, 2015