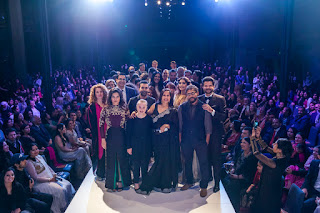 Pre-eminent Bollywood actor Anil Kapoor, who made his Hollywood debut as the quiz-show host in Slumdog Millionaire,was recognised with the IFFM Excellence in Cinema Award, following Amitabh Bachchan who was presented with the inaugural award in 2014.


Commenting on the Best Actor Award IFFM judge Jill Bilcocksaid:
“Irrfan Khan as Rana in Piku gave a wonderful restrained performance with great attention to detail and excellent comic timing. Irrfan is a master of the "slow burn”, creating plenty of sexual tension and a character that owns the screen.”


Bhumi Pednekar won Best Actress for her role in Dum LagakeHaisha, which made its Australian premiere at IFFM and screens again August 25.


Jury member Andrew Anastiosiassaid:
“Bhumi should be applauded for the unaffected earthiness, courage and natural humour she brings to the role of “Sandhya”. Her portrayal of an unconventional heroine who is confident and comfortable in her own skin, challenges the stereotypical images of the Hindi movie star and is sure to have a ripple effect throughout the industry. It is hard to believe that this is her debut. The honesty and joy in her performance made her my absolute favourite, and has won many hearts with audiences.”


The Telstra People's Choice Prize for the Indian film with the highest Australian box office takings in 2014 went to PKdirected by RajkumarHirani which screens on August 18.


“Festival director MituBhowmick-Lange said “These awards reflect the extraordinary quality and diversity in today’s vibrant Indian film industry. Equality is this year’s festival theme and so many of these films share messages of hope and strength of the human spirit times of difficulty. We feel honoured to have so many of India’s talented stars and filmmakers with us in Melbourne to celebrate the ability of film to cross borders and Indian Independence Day”.


The awards were judged by a panel of Indian and Australian film industry figures including Simi Garewal, Rajeev Masand, Andrew Anastasios, Jill Bilcock, and Nikhil Advani.


Directors ShoojitSarkar, M. Manikandan, actressBhumiPednekar and Piku producer SnehaRahani were in attendance at the gala to collect their awards, together with very special Festival guests including SonamKapoor, Simi Garewal, and Nikhil Advani.RajkumarHirani, Abhijat Joshi were unable to attend due to an accident in Mumbai.


Also announced were the winners of the Western Union Short Film Competition. The Australian winner is Mark Hellinger for Road to Glory, and the Indian winner is All India Bakchod for Rape: It’s Your Fault.


Rape: It’s Your Fault is a political satire by the edgy Indian comedy collective All India Bakchod.The pseudo-educational video intelligently explores rape culture and victim blaming in India, facetiously listing the reasons often given to women why rape is their fault – “Women who wear skirts are the leading cause of rape” – and addressing the systemic institutional problems that face women who seek justice, sending a sharp and powerful message through comedy.


Road to Gloryis a documentary short which captures the Williamstown Seagulls FIDA team on the road to the 2014 Grand Final, competing in an Australian rules league for people with an intellectual disability.


Attendees at the awards were entertained by two very special fashion shows from India’s leading fashion designers, AnamikaKhanna and Guarav Gupta, in the Great Hall of the National Gallery of Victoria, and a third showcasing exceptional Melbourne designers. All the designers donated some of their garments with proceeds going to The Royal Children’s Hospital Foundation.

The Indian Film Festival of Melbourne takes place from Friday 14 August – Thursday 27 August and is the southern hemisphere’s greatest celebration of Indian cinema.