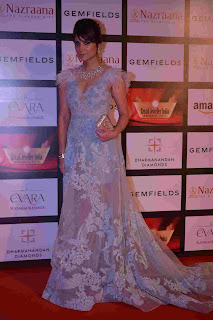 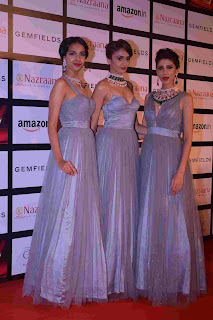 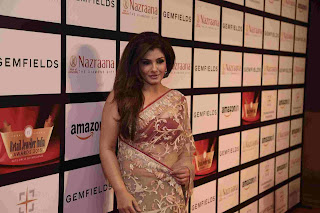 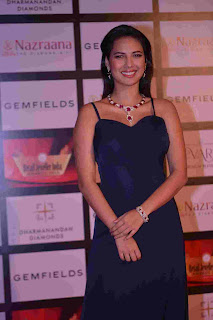 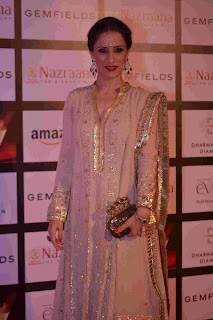 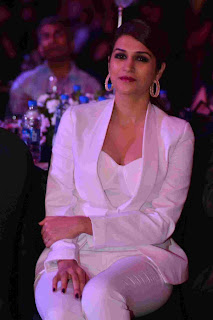 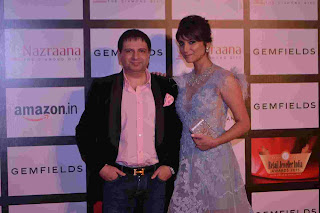 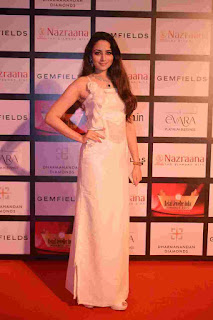 Mumbai, 8th August 2015: With a mission to raise the industry standards, create a strong business camaraderie, give industry heads a much-needed platform for networking and idea exchange and at the same time laud some exceptional efforts in the realm of jewellery designing and promotions, The 11th Gemfields and Nazraana Retail Jeweller India Awards 2015 (RJIA) were held on August 8, 2015 at The Grand Hyatt, Santacruz. The glamorous awards night witnessed the presence of celebrated personalities from the Bollywood fraternity like Raveena Tandon, Yami Gautam, Evelyn Sharma, Tisca Chopra, Zoya Afroz, Shraddha Das and few others. The night was hosted by Rochelle Maria Rao and Neha Sareen.


Over the years, The Retail Jeweller India Awards has established itself as the most coveted, prestigious and the most sought-after awards for the Indian retail Jewellery industry. It has given a platform to showcase the creative brilliance of India’s leading and most renowned jewellery houses including Kalyan Jewellers, Malabar Gold, Joyalukkas, Mirari, Hazoorilal, Notandas & Sons, Orra, Popley, Tribhovandas Bhimji Zaveri Limited, Waman Hari Pethe Jewellers, and many more. This year’s Award witnessed 1165 entries from across country and finally, after two rigorous rounds of judging only 82 designs made it as the final nominations.


This year, Retail Jeweller India Awards 2015 (RJIA) has launched a special award category – Shoppers’ Choice Award on Amazon India’s website for consumers to vote for their favorite jewellery. The voting was open from July 22 – July 31, 2015 for the RJI shortlisted Gemstone jewellery pieces on Amazon.in’s exclusive “Shoppers’ Choice Award” page. The 3 lucky winners, who participated in the voting process, were awarded with Amazon vouchers worth INR 5000 each to enjoy a convenient and reliable shopping experience on Amazon.in.


“These awards were launched at a time when the industry was opening up to the new opportunities of organized retailing. Today, in the context of the transforming consumer landscape, the awards have greater relevance. To keep pace with it, jewellery retailers are reimaging design and making it more versatile and cosmopolitan. These awards bear testimony to the industry’s growing standards of design brilliance catering to the modern consumer's need for differentiation and uniqueness,” said Soma Bhatta, Editor & Director, The Retail Jeweller India Magazine.


Representing a diverse group of people, distinguished professionals, all of whom are experts and leaders in their independent fields, the eclectic mix draws considerable collective wisdom and experience from across genres that have strong synergies with the jewellery industry.


“It’s a privilege for me to be associated with this prestigious industry Awards. The Awards play a noteworthy role in promoting excellence in the industry,” says Neha Dhupia, Actress.


Rouble Nagi, Artist & Muralist, says, "I equate jewellery with the work of art and the design and craftsmanship in this always impress me. The Awards underlined jewellers’ commitment towards excellence.


“The Awards helped me understand the application of art in jewellery,” says Ananya Banerjee, Artist.
“This year the competition was really tough, because some creations so exquisitely designed that we had a tough time to decide the winner,” says Radha Kapoor, Founder & Executive Director, Indian School of Design and Innovation (ISDI).


“This year Awards have shown that the industry is continuing its progress in terms of innovation,” says Ashit Kukian, President & COO, Radio City 91.1 FM.


“Banking on transparent, professional and detailed judging process, the Retail Jeweller India Awards has established itself as the most cherished industry benchmark. We are very proud of our association with this prestigious platform,” says Rupak Sen, Regional Marketing Director – Asia, Gemfields.
“The Retail Jeweller India Awards commands credibility of the highest level in the industry and retailers takes pride in showcasing their creative prowess in design and retail and marketing concepts at this prestigious arena,” says Piyush Patel, Director, Dharmanandan Diamonds.


“Jewellery is embedded in our culture. The challenge is to keep it relevant to a demographic that is largely youth. In the recent past, we have seen the emergence of new metal, technologies and trends. It is only through design we can bind these elements to tell a story. The design idea and story-telling will play a central role in engaging with these young audiences. Platforms such as The Retail Jeweller India Awards both inspire and challenge designers to create meaningful stories, says Vaishali Banerjee, Managing Director, Platinum Guild India.


Speaking on the occasion, Vikram Raizada, Director, Category Management, Amazon India said, “We are delighted to be associated with RJIA. There’s definitely a significant potential that the Indian market offers in online business of fine jewellery and we have seen an increasing uptick in the segment since the launch of the category on Amazon.in. By associating with the most premium and prestigious platform of the Indian Jewellery Industry, we aim at bringing most progressive jewelers under one roof to meet the different tastes and styles of all our customers. We look forward to partnering with jewelers, designers and jewellery brands to leverage the power of technology and provide unique experiences to customers across the country and the globe in the digital economy”.


Selection Process:
The winners were chosen after a meticulous selection process, The 11th Gemfields and Nazraana Retail Jeweller India Awards 2015 had a specialized physical judging round of the nominated creations to make the entire judging process more comprehensive. Following the initial selection process, the physical jury round allowed a thorough evaluation of the designs on quality, overall commercial and creative appeal. “With a fiercely independent judging process involving some of the most respected professionals in the field of fashion, art, corporate, entertainment, jewellery and marketing, The Retail Jeweller India Awards has already established itself as India's most premier business awards for the Retail Jewellery industry,” reaffirms Bhatta. Out of 1165 pan-India entries competing for the top slot only 214 entries got an opportunity to impress the grand jury. These designs are screened through a rigorous 3-tier selection process that includes initial screening by IMRB followed by a physical judging round by the jury. The final round of judging saw a critical daylong evaluation of these 214 designs at the Sahara Star, Mumbai by the esteemed jury panel.


About Retail Jeweller India Awards: Retail Jeweller India Awards was established in 2005 with the mission to take the US $30 billion Retail Jewellery industry forward by creating a platform for recognizing the best work of the industry in fields of design, retail and marketing.
Also known as India’s Oscars for the Retail jewellery industry and the only business awards specifically for retail jewellers in the country of 3 lakh retail jewellers.
With reputable jury, IMRB as the process auditors and NDTV Good Times as Television partner, the awards are the country’s premier and most authoritative national competition.
It is an initiative of the Retail Jeweller Magazine which is a specialized bi-monthly business magazine read by top jewellery retailers across 415 cities of India. Completely focused on the subject of jewellery retailing, the magazine enjoys highest readership amongst progressive jewellery retailers in the country. Delivering focused communication for 48,000 HNI readers it has emerged as a dependable and reliable source for industry happenings and developments.