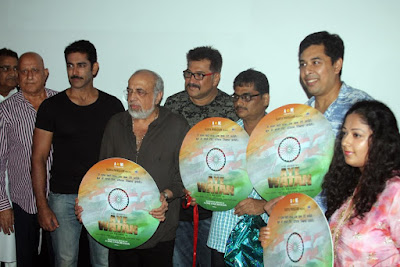 VED RAM GANDHI ( Producer ) : I was extremely fascinated with the script of AYE WATAN and also director Tarun Waadhwa did full justice to our vision. My daughter Vijayta Gandhi is the creative director and gave lots of inputs to the film which helped us all to make it a great patriotic film. I am happy that Balkishan Shrivastav took extra pains to release the film and we are all set to watch my dream project AYE WATAN coming before the paying audiences on 14th August. Janata is the Janardhan.

J.P. DUTTA: Ved Ram Gandhi has been associated with me for the past 30 years and he has always been focussed in the problems faced by producers during the shoot, after the shoot, post=production problems and he has literally made AYE WATAN single handedly. For me, freedom means not sitting on our heads. You know very well who has sat on our heads for so many years before India gained Independence. AYE WATAN looks very promising to me and the whole team has done full justice to the film. I feel.

K.C. BOKADIA: I was literally happy to see the dream of Ved Ji coming true as his film AYE WATAN is finally releasing on 14th August.  Tarun Waadhwa has done a fantastic job as the director and I think AYE WATAN will do wonders, if properly released.The first look of the film has shocked me as the sacrifices done by the great leaders of India still has a big hangover in my mind.  Tarun Khanna as Bhagat Singh has impressed me a lot. Even Samrat Mukherji as Chandrashekhar Azaad has done wonders in this film. I have literally seen Samrat growing before my eyes and he ued to come to Filmalays Studios where I used to shoot most of my 50 films and meet his father Ronu and Chachajis Joy, Shomu,Debu and Shubir.

TARUN WAADHWA: After I directed films like ANYAY HI ANYAY, BASTI and BHAGWAN AMARNATH, I got the offer from Ved Ram Gandhi who had signed Kuku Kohli to direct.But in a trial show of BASTI, he was floored by the reaction and also the film had done very well at the box-office and I got the chance to direct AYE WATAN.BHAGWAN AMARNATH had done a business of Rs. 3 crore in Gujarat alone where it was tex-free. On the sets of AYE WATAN, each and every actor and technician cooperated with Ved Ram Gandhi and me to the hilt. Ved Ram Gandhi is one of the best persons in the film industry too and he has the knack of doing great things. I give him full creditto Ved Ram Gandhi for taking all the pains to release the film on 14th August in such a big way. I feel, the youth of the country must come in a big way to make the film a big success.I am also directing KALASH, for producers Shobha Kapoor and Ekta Kapoor which is on air in Life O.K. from Mondays to Fridays. Since the past 7 years, I have been working very hard for the serials of Balaji.I am greatly indebted to Jeetendra's family as they have given me work when I was totally down in my career and they always will help me, I am sure.

VIJAYTA GANDHI:(Daughter of Ved Ram Gandhi) I have literally seen my father slogging so hard on and off the sets of AYE WATAN. I learned so many things from him and also director Tarun Waadhwa who has made a gripping patriotic family drama which is also technically a brilliant film. Today's youth must know how hard it was for India to gain independence and the great sacrifices done by Bhagat Singh, Chandrashekhar Azaad,Sukhdev, Rajguru ,Lala Lajpat Rai etc. In fact, nowadays people want to know what happenned before 1947 and how our independent country was born on 15th August. The release date of 14th August is very timely and we are all going to the cinema halls to clap for whatever we all did to bring the film before the paying audiences.

GOVIND NAMDEV: I play the role of Lala Lajpat Rai in AYE WATAN. I ws shooting the scene of my torture where I get beatings on my head and I ultimately die. I was shocked that Lala Lajpat rai must have faced so much pains and I cried a lot on the sets. I must admit that director Tarun Waadhwa and action master Mohan Baggad did a very fine job that day and they are very sensitive people too. It makes a great sense to act in films depicting freedom movement and I am proud to be associated with AYE WATAN.

TARUN KHANNA: I have played the role of Bhagat Singh who is immortal. It was a golden opportunity for me to play this great man's role. The sacrifices of Bhagat Singh is a story retold thousand times in every home in India and even abroad. I hope now this film will move the audiences too and I am eagerly waiting for the film's release. Hats off to director Tarun Waadhwa who in a very limited budget has made such a wonderful patriotic drama.

SAMRAT MUKHERJI: My role of Chandrashekjhar Azaad is very unforgettable in this film. I have read several stories of the freedom movement but the one which clings to my heart is the one where the Bhagat Singh chapter begins and all those who helped him in the freedom struggle. My parents feel very proud of me whenever I speak of AYE WATAN. Producer ved ram gandhi has also struggled a lot and I have seen him coming to Filmalaya Studios for the past 40 years. He deserves all the salutes. Also, I must admit that director Tarun Waadhwa has managed to make such a gripping, patriotic film within the given budget. He is truly a producer's director.

BALKISHAN SHRIVASTAVA( World Distributer): When I saw the film AYE WATAN, I was wonder-struck with the execution of director Tarun Waadhwa who must get big budgetted films now as he is a fantastic director. Since AYE WATAN is now finally set for release on 14th August all over, I am now trying my best to get the best chain of cionemas as this film richly deserves to be seen by the youth especially who are lovers of the country as India has got its independence by the blood and soul of people like Bhagat Singh, Rajguru,Chandrashekhar Azaad, Sukhdev etc.
Posted by http://www.starfriday2012.com/ at Wednesday, August 05, 2015