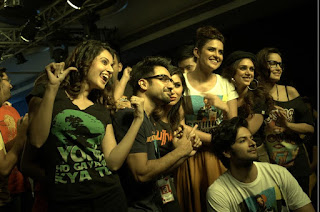 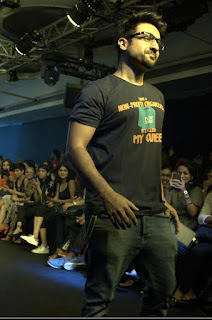 28th August 2015, Mumbai: Vir Das, the widely known stand-up comedian and actor recently turned designer and launched his first ever collection at the Lakme Fashion Week Winter/festive 2015. His collection includes a wide range of quirky boxers and t-shirts that were unveiled with great splendour amidst an absolutely unique fashion show called Pret-a-funny by Vir Das.

Fashion clubbed with loads of fun is what Vir had to offer to his audience. Pret-a- funnywas a one of its kind show with 15 showstoppers which definitely made it stand out amongst all other shows. It was amazing to see how his closest friends from the industry came together to support him where every celebrity walking was the show-stopper. In an environment of serious and classy fashion, it was refreshing to see the celebrities walk in boxers and t-shirts. It was a gala show with a bunch of celebs like the elegant Tapsee Pannu, the gorgeous Aditi Rao Hydari, actor/singer Miang Chang, Sophie Chaudhry, Ali Fazal, Kunal Roy Kapoor, Deeksha Seth, Shazahn Padamsee, Cyrus Sahukar and Naezy Rapper. The uniquely formatted show left the audience in complete awe and thus received a fabulous response which only encouraged the newly turned designer to return back next year with an even quirkier show.

Elated by the response of his audience, Vir Das says, “I am extremely thankful to this infinitely cool group of people who came together to make this show a huge success. The idea was to launch the line and have a party at the same time and inject some naughtiness into fashion week”

The multi-talented designer nailed it this time as well just like his successful comedy shows and left the audience wanting for more.
Posted by http://www.starfriday2012.com/ at Friday, August 28, 2015