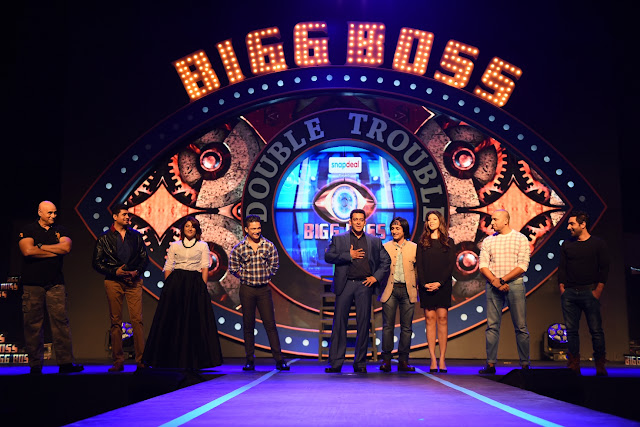 ~ Salman Khan returns as host for sixth season in a row ~
Snapdeal revisits as the Presenting Sponsor; Powered by OPPO Smartphones and Driven by Maruti Swift ~


Mumbai, 28th September, 2015: If you cry at trouble, it grows to be double. But if you learn to laugh at trouble, it will disappear like a bubble. As COLORS prepares to launch its most widely awaited reality show, Bigg Boss Nau, there is only one underlying premise: the show is going to bring double the confusion, double the giggles, double the grins, double the trouble and double the entertainment! And as the doubly exuberant host Salman Khan joins hands with the double minded Bigg Boss, one question prevails…In the battle of the trouble and the double, will Salman Khan be the peacemaker or the provocateur? To know how, tune into Bigg Boss Nau starting 11th October, 2015 at 9:00 PM with subsequent episodes airing every Monday to Friday at 10:30 PM and Weekends at 9:00 PM on COLORS.


Even before the unveil of the show, the channel has roped in sponsors Snapdeal, OPPO Mobiles, Maruti Swift, Garnier Men Powerlight, CP Plus CCTV Cameras etc.


Speaking about Bigg Boss Nau, Raj Nayak, CEO – COLORS, said, “The brand Bigg Boss today has transcended the television screens and has become a phenomenon engaging kids and families to artists and musicians, sports-stars, movie stars, fashion designers, social media mavens and even the Nation drivers. This is the show where stars are made. With a volley of inimitable personalities even this year, Bigg Boss Nau is going to enhance family viewing with the promise of double entertainment. We once again welcome Snapdeal and OPPO on-board as sponsors for the second season in a row along with Maruti Swift. And of course, megastar Salman Khan who has become synonymous with Bigg Boss as the host for the sixth season.”


I. Srinivas Murthy, Senior Vice President Marketing Snapdeal, said, “Big Boss is only getting bigger and better with every season. We joined hands with television’s most popular show last year and engaged with our audiences on a daily basis through innovative in programme integration. We are very excited to partner with Big Boss Nau and look forward to great response from the viewers this season too.”


The reigning host of Bigg Boss superstar Salman Khan on his return for the sixth time said, “This season with Double Trouble being the flavour, the contestants have no choice but to double up and face the trouble, or remain disconnected and invite trouble! Bigg Boss Nau comes with the promise of unlimited and unadulterated entertainment which will create a strong bond between viewers and the contestants fuelled by fun, empathy and, sometimes, sympathy.”

Mr. Mike Wang, CEO, OPPO Mobiles India said, “We are pleased to renew our association with the immensely popular show Bigg Boss this season. We firmly believe that this partnership with Bigg Boss will help establish our reach across India giving us an opportunity to connect with a wider audience. There is no platform better that entertainment in India and we wish the show a huge success.”


Revealing what Bigg Boss Nau contestants will be in for, Manisha Sharma, Programming Head – COLORS said, “The return of Bigg Boss each year marks the return of the ‘family viewing nights’ for the viewers. Bigg Boss Nau is going to be double the fun and double the trouble with Salman Khan in the middle. The addition of the show at 10:30PM along with our other thriving prime time properties will only bolster the viewership further on COLORS.”


Commenting on the scale of the show, Deepak Dhar, CEO and Managing Director – Endemol India Pvt. Ltd., said, “The concept of our show ‘Bigg Boss’ has always kept the audiences intrigued. The theme of ‘Double Trouble’ promises to offer double the fun and entertainment with various twists and surprises. This year too fans of this biggest reality show format will be hooked to the TV, as this season the contestants will be put in unanticipated situations that will make an interesting watch for the viewers. The production value of the show will be more enormous and the expertise of the team working on the show will leave no stone unturned to offer unlimited doze of entertainment."


Bigg Boss Nau promotions will be amplified across traditional and digital mediums with a plethora of activities on social media platforms during different phases of the show. In the pre-launch phase, COLORS has planned a special townhall with Bigg Boss ex-contestants shedding light on what one can expect during their journey on the show. This will be coupled with a specially created Facebook app which reveals ‘Who’s your double trouble partner?’ With Twitter and Facebook prompts, Vine Videos, Twitter Mirror and Periscope updates as the contestants step inside the Bigg Boss house, the high-octane launch outreach will create conversations around Bigg Boss Nau. The excitement will sustain even post launch with a volley of digital initiatives including polling cards, cartoons and real-time updates on Whatsapp Groups and Snapchat. Throughout the course of the season, a live feed, sneak peeks, behind-the-scenes content and uncensored updates will keep viewers engaged. On the marketing front, the channel has planned an integrated 360-degree campaign utilizing different mediums such as print, channels, and OOH among others.


Watch out as nemesis’ collide, and fun and confusion ensues as
Bigg Boss Nau welcomes Double Trouble!
Every Monday to Friday at 10:30 PM and Weekends at 9:00 PM on COLORS


Catch all this and more on colors.in.com/biggboss | You can also follow the action on Facebook at COLORS TV and BIGG BOSS or Twitter at @COLORSTV and @BiggBoss using hashtags #BB9 and #BiggBossDoubleTrouble | Instagrammers can get exclusive information on COLORSTV


About Endemol India
Endemol India is one of the leading and most valuable content production companies in India across television, film and digital content. The company is a 51:49 strategic alliance between Endemol BV – the world’s largest independent television production company and CA Media – the Asian investment arm of the Chernin Group (TCG). The company has over the years produced successful television shows like Bigg Boss, Fear Factor, Laughter Challenge, Jo Jeeta Wohi SuperStar, over 400 episodes of Deal Or No Deal and the recently launched The Money Drop for Sun Network amongst others. Endemol India has also forayed into the movie making business with the remake of blockbuster Kahaani in Tamil and Telugu.


About Snapdeal
Snapdeal’s vision is to create India’s most impactful digital commerce ecosystem that creates life-changing experiences for buyers and sellers. In February 2010, Kunal Bahl along with Rohit Bansal, started Snapdeal - India’s largest online marketplace, with the widest assortment of 15 million+ products across 500+ diverse categories from thousands of regional, national, and international brands and retailers. With millions of users and 150,000 sellers, Snapdeal is the shopping destination for internet users across the country, delivering to 5000+ cities and towns in India. In its journey till now, Snapdeal has partnered with several global marquee investors and individuals such as SoftBank, Alibaba, Foxconn, BlackRock, Temasek, eBay Inc., Premji Invest, Intel Capital, Sequoia Capital, Mr. Ratan Tata, among others. For further information, visit www.snapdeal.com