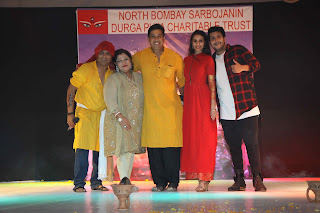 
Every year, the pandal is visited by famous personalities from the Bollywood fraternity and this year was no different. Raja Mukerji, Sharbani Mukerji, Samrat Mukerji, Sumona Chakravarti and many others were present at the North Bombay Sarbojanin Durga Puja 2015 to seek blessings of Maa Durga on Maha Panchami (18th October). Each day will see a host of celebrities visiting the pandal followed by various artists adding the entertainment quotient.


The evening of Maha Panchami (18th October) saw members of the Mukerji family get together to bring in the Durga Puja festival followed by the Committee Night where close friends and family members like Raja Mukerji, Sharbani Mukherji, Samrat Mukherji, Rema Lahiri, Bappa Lahiri and others performed on traditional Bengali songs dedicated to the Goddess.


This year the North Bombay Sarbojanin Durga Puja 2015 is in its 67th year and the theme is the famous Meenakshi Temple which is one of the ancient and important temples of India. Bhog will be served in an air conditioned hall on 20th, 21st and 22nd October, 2015. Ensuring the convenience of the numerous devotees visiting the pandal, the trust provides the devotees with better infrastructural facilities such as a pleasant location overlooking the Juhu Beach, easy accessibility to the venue for all the devotees, abundant car parking space and a luxurious pandal with better security and washroom facilities. The Puja will be streamed live on www.northbombaydurgapuja.com.


The stage of this pandal has been very lucky and auspicious for upcoming talent since its inception. Great personalities have performed on this stage and reached great heights over years. Some of the famous names include Sanjeev Kumar, Hemant Mukherjee, Mala Sinha, Bappi Lahiri, Sudesh Bhosale, Johnny Lever and many others who have ruled the industry. The stage is considered as one of the luckiest for upcoming talent and artists who have performed and later made a big name for themselves in the Bollywood industry.


Dusshera will be celebrated on 22nd October (Maha Novomi & Maha Dashami) wherein Durga Maa’s idol (17 ft X 30 ft) will be immersed at Juhu Beach with help of a huge crane. North Bombay Sarbojanin Durga Puja’s visarjan is known to be a spectacular experience for the viewers. Prior to the visarjan, the ladies will gather for the Sindoor Utsav.

About the Trust:
The Mukerji family’s Durga Puja is a Mumbai based non-profit organization which is involved in various charitable causes through its vast and distinguished member base. The trust was founded in 1948 by Mr. Sasadhar Mukerji of Bombay Talkies also a well-known Hindi films producer, a Padma Shri Awardee and the one who is described as the founder of Filmistan & Filmalaya Studios, along with Mr. J. M. Bhadra and other family members and like-minded people of the Santacruz area. The founding committee consisted of 26 members, led by Mr. Sasadhar Mukerji as its President. Today, Mr. Deb Mukerji is the Secretary of North Bombay Sarbojanin Durga Puja. Over the years, the Trust’s followers has expanded to more than 50,000 and voluntary work by these dedicated members keeps the organization committed to its primary objectives.
Website - http://www.northbombaydurgapuja.com/