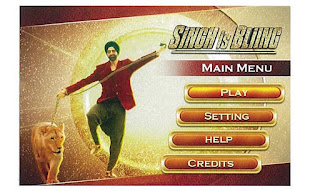 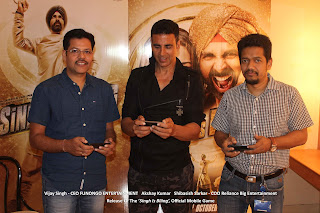 Mumbai 1st October 2015: Director Prabhu Deva’s much anticipated action comedy Singh Is Bliing is scheduled to be released on 2 October 2015. The film features Akshay Kumar, Amy Jackson, Lara Dutta and Kay Kay Menon in lead roles. Accompanying the film’s theatrical release is the movie’s official mobile game.
The official Singh Is Bliing game is published & distributed by FunOnGo Entertainment Pvt. Ltd., a digital entertainment specialist across movies, music, games and applications. The company provides customized platform and managed services to clients such as Samsung, Micromax, Karbonn, Intex, Spice& Gionee.
The game publishers have designed the game in a manner that gamers get a real good feel of being in the shoes of their favorite action hero Akshay Kumar. The run up to the castle and the fight sequences on the floor are evocative of the fast pace, taut action that Akshay is famed for.  On completion, the game was showcased to Akshay; He said “I really liked the game, the fights were so good that I ended up playing the game for most of the day”
The interactive mobile actiongame requires Rafttaar Singh to go on a mission to save Sara, who has been captured and held captive in a castle.
The gamer plays as Rafttaar Singh and can unlock up to three stages of game play as he succeeds from one level to another.
In the first level of the game, Rafttaar Singh is expected to run up towards the castle jumping over hurdles, avoiding obstacles and dodging oncoming threats. The gamers will really like the slide kick play action to counter attack their on screen enemies.
The level two takes Rafttaar Singh inside the castle, fighting here the gamer could find health levels drop with the onslaught of enemy punches, but they have the use of a life line too! The fight controls are intelligently placed on screen in the second level.
The third level is the more advance level and here Raftaar Singh gets to rescue the lovely Sara.
The official game is available across most of the popular feature and smart phones in India.

Speaking about the release of the official Singh is Bliing game, Vijay Singh CEO of FunOnGo Entertainment said; “We see the mobile phone as a fantastic gateway for film makers to reach their potential consumer. Our team plays an active role in publishing, marketing and distribution of the games we do. Mobile games provide for an immersive experience and turn curious bystanders to engaged fans.
Adding to Vijay’s point of view Shibasish Sarkar, COO of Reliance Big Entertainment added; “In the business of entertainment fans create customers and this impacts box office performance. Our alliance with FunOnGo to publish the official game is with the view to provide the customer a value added cinematic experience”
The Singh Is Bliing – Official Mobile Gameis available for users downloads on Android, IOS marketplace and other popular app stores online.

Reliance Big Entertainment Pvt. Ltd. recently announced a joint venture with Phantom Films for its Film Production and Distribution business. The combination of Reliance and Phantom Films plans to develop and produce at least 5 to 6 films every year, apart from distribution of films in India and overseas, and syndication of rights from the Reliance Entertainment library.

Internationally, Reliance Entertainment has partnered for the past over 5 years with iconic film producer and director, Steven Spielberg, in a 50:50 joint venture, DreamWorks Studios, which has produced award winning and highly successful films, such as The Help, War Horse, Lincoln and The Hundred Foot Journey.

The company is also the exclusive Home Video licensee to prestigious studios including Universal Pictures Int. Ent., Paramount Home Ent. Global, DreamWorks Pictures, BBC Worldwide Ltd and other independent film studios.  With its robust pan India distribution network, the company has ensured reach for Bollywood and Hollywood products, not only in urban market but also mass markets. The Home video division has launched blockbusters such as Piku, PK, Singham Returns,Holiday, Kick, Lunchbox and 2 States besides International franchise films such as Transformers, Fast and Furious, Jurassic Park etc. on home video. The company is also the licensee to leading developer and publisher Codemasters for their gaming software for PC & Console.