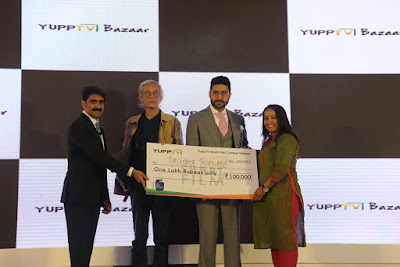 The one stop destination for premium video content
Mumbai, December 23, 2015: YuppTV, the world’s largest Over-The-Top (OTT) provider for Indian content, has launched YuppTV Bazaar, a marketplace for high-quality video content. The formal announcement, which took place on December 23 at JW Marriott in Juhu, Mumbai, was also attended by several dignitaries such as the Governor of Maharashtra. With the launch of YuppTV Bazaar, YuppTV will now host curated premium video content across various genres such as Education, Short Films, Web Series, and Trailers etc.
The move will be music to the ears of independent video content creators, who often find it tough to monetise and market their premium content through traditional video-sharing portals, satellite and DTH platforms. Through assured quality supervision and a large native user base, YuppTV bazaar will allow these entrepreneurs to showcase their high-quality videos on a trusted platform and reach out to an audience ranging in millions across the world through devices such as Smart TVs, smartphones, tablets & PCs.
Speaking on the launch, Mr. Uday Reddy, Founder & CEO, YuppTV, commented, “With the proliferation of unregulated video content on the digital platform, content monetisation and visibility is a prime concern for premium video content creators who often find their content being lost in a deluge of casual user-generated content. YuppTV Bazaar is being launched as a solution that will overcome the traditional roadblocks associated with free-for-all video sharing platforms. We are confident that this development will be a major success and will empower content developers with the perfect medium to share and monetise their offerings.”
Hon’ble Governor of Maharashtra, Shri Vidyasagar Rao, added, “In today’s digital age, with technology having changed the way many industries operate today, YuppTV’s launch of its premium video content platform YuppTV Bazaar comes as a very welcome move. By providing a medium to independent creative content creators for showcasing their works, YuppTV has taken the spirit of entrepreneurship to a new level. I support the initiative wholeheartedly and wish YuppTV and YuppTV Bazaar all success.”
Abhishek Bachchan, who was also present at the launch, added, "India, at the moment, is brimming with talent looking for an outlet for their creativity. The launch of YuppTV Bazaar from YuppTV is a welcome move that will provide the indie moviemakers with a trusted and curated platform for showcasing their talent."
Since its India launch in October 2015, YuppTV has been creating ripples across the digital entertainment industry owing to its unique approach and extensive network. Today, YuppTV is the world’s largest internet TV and video on demand (VOD) streaming provider with more than 5 million mobile app downloads and an audience base reaching 400+ million households through Smart TVs. It is also the 2nd most popular app in Google Play Store and the most popular TV app on LG and Samsung Smart TVs in India.
About YuppTV
YuppTV is one of the world’s largest internet based TV service provider, offering 200+ Indian TV channels in 12 languages. YuppTV offers Live TV and Catch-Up TV technology, whereby viewers can watch TV content from past 7 days and never miss their favourite Shows. In addition viewers can also watch 5000+ movies and 100+ TV shows at the click of a button. YuppTV is currently ranked #1 Internet Pay TV platform for Indians living abroad and also the largest Internet TV platform from premium content availability in India and reach to Internet enabled devices.
YuppTV service is accessible anytime anywhere through Internet in devices like Smart TVs, Smart Phones, Tablets and PC without the need of traditional set ups like antennas and set-top boxes.


YuppTV was founded in 2006 with a vision to make Indian Television channels accessible to Indian expats living worldwide.  Today, millions of people are using YuppTV services to watch TV in more than 50 counties across the five continents.  YuppTV recently won prestigious ‘Top 100 companies in the world’ award by Red Herring based on innovation, disruption and technology for year 2015. On Oct, 2015, YuppTV launched its services in India for the first time with many innovative features such as Catch-up TV and Movie on demand etc. which are missing in traditional Cable or DTH TV platforms. YuppTV ensures both accessibility and affordability in India with packages as low as Rs. 5 per day.