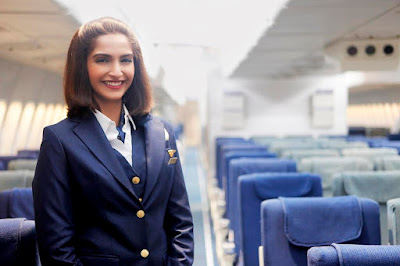 Neerja's mother has gifted a yellow dupatta to the actress!
Sonam Kapoor who would soon be seen in Ram Madhvani's upcoming Neerja was loved in the trailer of the film that was released by the makers.

The trailer had left a strong impact amongst audiences and it also garnered tremendous response from across.


Before beginning shooting for the film, the Neerja Team met Neerja Bhanot's Mother and Brothers in Chandigarh.

Rama who was very aware of Neerja's choice had bought a bright yellow coloured dupatta to gift it to her daughter. However as the tragedy happened, Rama never got a chance to gift her the present.

Sonam was extremely honoured and was full of mixed emotions. The actress will be wearing the dupatta at one of the screenings of the film.

Directed by Ram Madhvani and Produced by Fox Star Studio's and Bling Unplugged. Neerja is  a film based on the heroic story of Neerja Bhanot who sacrificed her life while saving passengers from terrorists on board the hijacked Pan Am Flight 73 on 5 September 1986. The film is all set to release on February 19th, 2016.
Posted by http://www.starfriday2012.com/ at Saturday, January 30, 2016