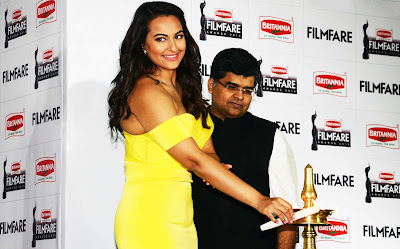 Westin, Mumbai, January 4th, 2016
A new year brings new opportunities. It’s that time of the year when Filmfare celebrates and honours the best films of the year gone by. 2015 was particularly memorable because for the first time, Hindi films bridged the gap between the classes and masses. Films that earned the big bucks at the box-office were also the ones that took home the critics’ and audience’s hosannas. One artiste who stands for the balance between art and mart is Sonakshi Sinha.
To announce key details about the 61st Britannia Filmfare Awards 2015, Sonakshi took to the press conference stage in Mumbai. She expressed her opinions about the big films of the year gone by, as well as spoke with remarkable elegance about the Filmfare Awards. The young superstar cajoled the media present at the event. It was the perfect way to kick-start the Filmfare awards frenzy in 2016.
The star-studded announcement was made at the Westin hotel in Mumbai on January 4, 2016. Sonakshi was accompanied by Mr. Jitesh Pillaai - Editor Filmfare magazine and Mr Vinay Subramanyam, Category Manager, Britannia Industries Limited- was also present at the event. Together, they lit the lamp marking the start of another stellar celebration of the best of Hindi cinema.
Commenting on the 61st Britannia Filmfare Awards 2015, Mr Jitesh Pillaai said, “It's been a great year at the movies. From the big budget blockbuster to the off kilter middle of the road cinema, sense and substance prevailed at the movies. Filmfare has always celebrated that unique blend of excellence in cinema.”
Bringing in a whole lot of enthusiasm and Britannia’s characteristic leadership insights, Mr Vinay Subramanyam said, “Britannia is happy to continue its association with the Filmfare Awards 2015 as a Title Sponsor for the second year in a row. The Britannia Filmfare Awards 2015 brings together the two things that every Indian loves- Food and Entertainment. Britannia has rolled out a large scale promotional campaign called "Britannia Khao, Filmfare  Jao"in December to enable our consumers to have a first time ever experience of being at the Filmfare Awards Function. This promotion has received an overwhelming response, and we are confident of an even larger consumer engagement in the run up to the event".
Filmfare’s exclusive 31 award categories will highlight the grand ceremony of the 61st Britannia Filmfare Awards 2015 to be held on January 15, 2016 at the Dome, NSCI in Mumbai.


About Britannia:
The story of one of India's favourite brands reads almost like a fairy tale. Once upon a time, in 1892 to be precise, a biscuit company was started in a nondescript house in Calcutta (now Kolkata). Today, more than a century after those tentative first steps, Britannia's fairy tale is not only going strong but blazing new standards, and that miniscule initial investment has grown by leaps and bounds to crores of rupees in wealth for Britannia's shareholders. The company's offerings are spread across the spectrum with products ranging from the healthy and economical Tiger biscuits to the more lifestyle-oriented Milkman Cheese. Having succeeded in garnering the trust of almost one-third of India's one billion population and a strong management at the helm means Britannia will continue to dream big on its path of innovation and quality. And millions of consumers will savour the results, happily ever after. More information on the Company is available at: www.britannia.co.in
About Westin Mumbai Garden City :
With close proximity to the International Airport, business centers and shopping centers, Westin Mumbai Garden City offers a perfect combination of luxury and comfort. The Heavenly SPA by Westin and the Westin Workout Fitness Studio are the highlights of this hotel. The views are breathtaking from the restaurants on Level 18, where the world of culinary treats meets remarkable Food and Beverage venues. The Westin Mumbai Garden City is the perfect way to experience the opulence of tinsel town.