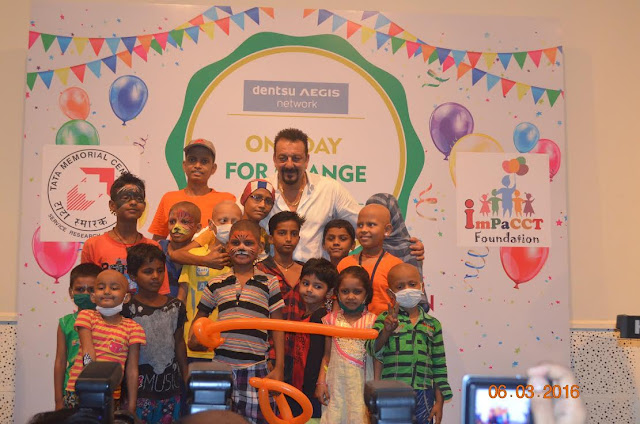 ~In India, an estimated 1,500 Dentsu Aegis Network employees across offices in Mumbai, New Delhi, Kolkata Bangalore, Chennai and Kochi contributed their time towards a social cause~


With children playing the central role in the programme this year, the India chapter of this global initiative successfully reached out to as many as 2500 children across the country.  An estimated 1,500 Dentsu Aegis Network employees across offices in Mumbai, New Delhi, Bangalore, Kolkata, Chennai and Kochi were engaged to execute the project, “Champions For Children.”
In India, the key focus of the ‘One Day For Change’ (ODFC) programme was held across four categories – digital, education, health and entertainment.
As part of the digital push, the network’s Delhi office visited Kushi Rainbow Girls Home to donate   laptops and conduct sessions on excel & IT skills. Meanwhile, the employees also visited the Earth Saviours Foundation and interacted with more than 300 mentally challenged children.


In Mumbai, Dentsu Aegis Network touched the lives of 1100 kids across nine child welfare organisations. It is pertinent to note here that the Dentsu Aegis Network employees also created a Fun Fair for more than 200 children suffering from various forms of cancer to entertain them all through the day.


The event was attended by none other than Bollywood actor Sanjay Dutt, the Chief Guest for the day at the Tata Memorial Hospital, Parel.


The company also arranged an educational excursion for 100 underprivileged children, supported by Umang Foundation, to Nehru Science Centre, Worli. Additionally, the group set-up a dental health check-up camp at Madras Wadi, a slum area near Worli, where 300 children turned up for the event.
The network was sub-divided into teams of 20-50 in Kolkata, Chennai, Bangalore and Kochi. Each team visited a particular child welfare shelter to execute a variety of creative workshops.


Delhi, Bangalore and Mumbai also tied up with various hospitals and NGOs to organise a blood donation drive for kids with Thalassemia and Cancer. Over 250 bottles of blood were donated by Dentsu Aegis Network staff across all regions.


Mr. Ashish Bhasin, Chairman & CEO South Asia Dentsu Aegis Network said, “One Day For Change is extremely important to us at Dentsu Aegis Network. It gives all our employees an opportunity to give back to the society, as a team. More important than what we volunteer in kind and cash is the time we all volunteer together. We hope to continue many of these activities throughout the year. It really feels good, as a team, to be able to do our bit.”