‘MONIN CUP 2016’ - Winner of the Mumbai Zonal round announced 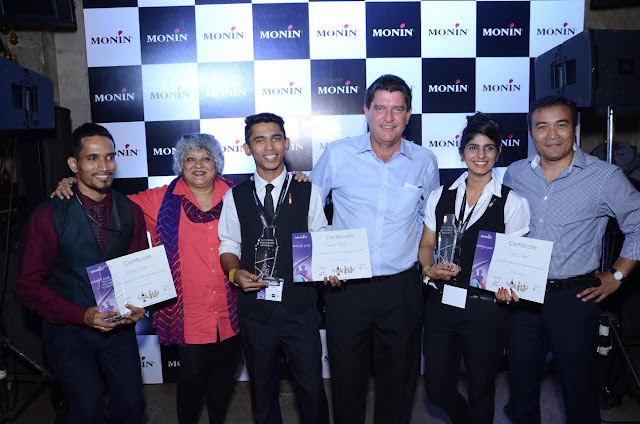 The international platform & competition for young and upcoming bartenders got bigger & better
MUMBAI, SEPTEMBER 2016: After a daylong competition involving creativity and craftsmanship, Tanvi Joshi, Pratik Pawar and Rakesh Moulik from Mumbai made their way to become the finalists of the MONIN Cup from the West zone. The finale of the western region was held on 19th September 2016, where the three winners beat 20 participants with their unmatched bartending skills. The winners impressed the judges with originality and uniqueness. The impressive presentation created a long lasting impact on the judges which made them the outright winners.
This season of MONIN Cup garnered a massive response with immensely talented bartenders from some of the best institutions. The participants had the opportunity to showcase their skills in front of some prominent judges like Yangdup Lama, Shatbhi Basu and Mr. Jeremy Coulbeck -  General Manager MONIN meia. After a successful regional round in Bangalore and Mumbai the competition is all set to take place in Pune and Gurgaon. The final winner will be chosen post a grand finale in Gurgaon and will represent India at MONIN Cup 2016, France.


Commenting on the occasion Mr. Jeremy Coulbeck -  General Manager MONIN MEIA said, “We started MONIN Cup in the year 2010, and today it has grown to another level; we have got incredible response by some of the young talent in the field of bartending. The Mumbai zonal round was thrilling as the judges had a tough time choosing the finalist considering each participant raised the bar of the competition. MONIN always believes in encouraging new talent by offering such a global platform for young and budding talent. We are hoping for a win for India at the grand finale in Paris.”
Posted by http://www.starfriday2012.com/ at Tuesday, September 20, 2016