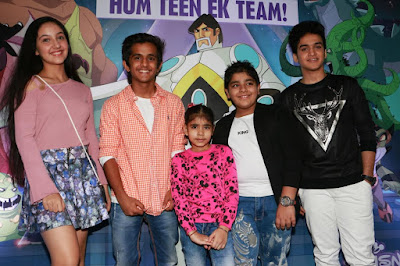 Premieres on Disney Channel on the 28th of November, Monday at 3: 30 p.m

Mumbai, 26th November, 2016: A special screening of  the much-awaited superhero animated series - “Astra Force” with legendary icon, Amitabh Bachchan was hosted today at Sunny Super Studio, Juhu which was attended by celebrity artists like Faisal Khan, Sadhil Kapoor, Arush Rana & Ashnoor Kaur. The kids were thrilled to watch Mr.Bachchan’s new avatar and expressed their immense excitement at the premier. A shout out to all superhero lovers as a must watch series.
A funny and fast-paced, action-adventure series, filled with laughs and thrills, “Astra Force” tells the story of a mythical hero from a distant world, who was stranded on Earth millions of years ago, after an epic space battle. When 8-year old brother and sister twins accidentally awaken the mythical superhero from his long hibernation, they must teach him about the modern world and join Astra to save the universe from a new wave of giant monsters and intergalactic threats. Together they will fight for Truth, for Justice and for Ice cream!
Astra Force features the voice of Mr. Bachchan as the powerful new superhero, "Astra" in his first animated kids television series. The 52 part, series will be aired every week from Monday to Thursday at 3:30 p.m.
The new Indian superhero was created by Mr. Bachchan and Sharad Devarajan, Co-Founder and CEO of Graphic India who are producing the series in partnership with Disney Channel.