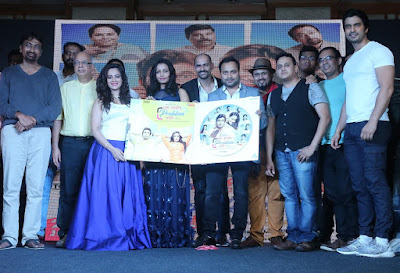 The Music Launch of one of the most awaited Marathi movie releasing in July "Mala Kahich Problem Nahi”, starring Gashmeer Mahajani and Spruha Joshi, was a melodious event that took off in great style in the presence of Media & Marathi Film Fraternity. After the teaser being digitally launched of "Mala Kahich Problem Nahi" there has been a huge buzz about the movie on social media, and now the music launch has added to the excitement of knowing what exactly is going to be served on the platter. To keep the excitement intact the teaser was screened at the beginning of the show. The entire star cast Gashmeer Mahajani, Spruha Joshi, Kamlesh Sawant, Vijay Nikam, Mangal Kenkare, Seema Deshmukh, Satish Alekar & others along with the director Sameer Vidwans, screenplay & dialogue writer Kaustubh Savarkar with producers Reecha Sinha and Ravi Singh were present @ the event. Many other prominent actors were also seen at this event.
The event kick started with a beautiful & unique enactment of the onscreen couple Gashmeer and Spruha on the melodious & fresh track “tujhya sathi asnehi, nasnehi tujhyasathi” which was further continued by the singers Jasraj Joshi & Anandi Joshi. To add on to the glory “Virlya Kenvha hya haluwar bhavna” sung by Priyanka Barve left every one present mesmerized by its melody. We can hear the song in the voice of Abhay Jodhpure and Priyanka Barve in movie. Followed by Bela Shende’s foot tapping traditional Konkani song ‘Tuka Saad Tujhya Maherachi’s Video launched at this event. To top it all heart touching romantic track ‘Maunatun hi vaat chalali pudhe’ being sung by Jasraj Joshi & Shruti Athavale. The musicians Hrishikesh, Saurabh and Jasraj and the Lyricist Guru Thakur and Vaibhav Joshi did complete justice to the songs. The music of Mala Kahich Problem Nahi ranges from emotional to romantic melodies. On the whole, the album of Mala Kahich Problem Nahi turns out to be a pure delight to the ears & assures to be a sure shot entertainment package for all. Torque presents & Filmy Keeda Productions ‘Mala Kahich Problem Nahi’ produced by P. S. Chhatwal, Reecha Sinha & Ravi Singh is slated for release on the 28th of July.